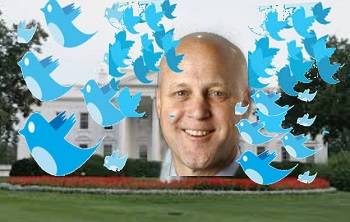 In the days of the Internet, email and social media, one of the ways to tell how itchy a person might be is to look what they are saying online.  Normally, if a campaign gets-a-brewing, the potential candidate percolating his or her thoughts on twitter, the free-speech alley of politics.

Landrieu has not let his feelings known, at least, has not stated to the public whether he will be shooting for the White House. According to Stephanie Grace of the Advocate, before any decision is made and any statement made in public, Landrieu has Biden on his mind.  Landrieu has clearly expressed his preference, that is for the former Vice President, Joe Biden

But, what if “Crazy Joe” decides the world is crazy enough and he’s already paid his dues, thank you?  Maybe, then, we will see more tweets and subtle hints coming from Team Landrieu.

But for now, if you look at his twitter feed, the former New Orleans mayor is pretty mum about national politics, that’s for sure. And compared to some of his “would be” competitors it’s not even close.

Not that he’s doing poorly in the twitter “followers” game.  So far, he has amassed 68,000 followers, which number absolutely is not chopped liver.  By comparison, Elizabeth Warren has 2.2 milliion followers, Kamela Harris has 2.05 million, Kirsten Gillebrand 1.32 million, Bernie Sanders with 8.97 billion. Oh, and Joe Biden? The former Vice President and for now, the leading candidate should he decide to make his move towards the aye side, has 3.2 million.

While twitter doesn’t a presidential candidate make, 68 thousand is a pimple on an elephant. Some name recognition he must do and fast.

Nor has Landrieu made the usual noise you would see on twitter. He did make his voice heard on the issue of the shutdown.  He tweeted, “The #TrumpShutdown has real consequences for real people. Worse, President Trump continues to scapegoat immigrants for crime. Instead of building a wall, let’s invest in modern border security, more and better trained local law enforcement, and tackling the opioid crisis.”

Also, he sniped at another Mitch about the shutdown, that is Mitch McConnell. The Majority Leader of the Senate. Regarding a recent The Hill article in which the Republican Senate leader was quoted to say, “"We certainly will not be in recess next week if the government is still shut down”, Landrieu responded with a short, “It’s pretty simple”.

He was mentioned in another tweet that proves he’s not just known in Broadmoor and Gentilly.

According to another post, he’s in great company: Mitch Landrieu will be a visiting fellow at the Harvard Institute of Politics -- Andrew Gillum will be a Resident Fellow. Other fellows include Gary Cohn, Heidi Heitkamp, Barbara Comstock, and Carlos Curbelo

But if twitter were the definitive sign as to a potential candidate’s intentions, he’s surely not tweeting, retweeting, liking and capturing followers.

Instead, it appears he looks like he’s in the mix, getting known on the national stage, so when one of the future major candidates horses pull out of the gate, he’s riding high or somewhere to campaign for a Democrat to take on the President.

More in this category: « The Eagles are plotting against me, New Orleans Saints, you must win Blown call in Rams game tests WhoDat Nation's championship mettle »
back to top