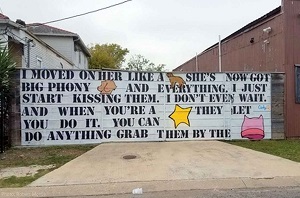 You might say the writing is on the wall or in this case, exterior fence.  Free expression primes the New Orleans code enforcement. At least for now.

A federal court just found in favor of a homeowner-artist, who like just about everybody on this globe, has had a few things to say about the current President of the United States, Donald Trump, whether it be positive or negative or both. Few, however, take it out on their own fence.

But here in New Orleans, one did. And with the help of the ACLU, the first amendment rights protecting speech, has "trumped" the city code.

Confused? Check out the press release:

A federal judge today struck down New Orleans’ mural permitting requirements, ruling that requiring property owners to submit proposed murals for “advance review and approval” is a violation of their First Amendment rights.

The ruling is in response to a lawsuit filed by the American Civil Liberties Union of Louisiana on behalf of New Orleans resident Neal Morris, who was ordered to remove a mural (which depicted misogynistic comments by President Donald Trump) or he would face jail time.

“Forcing artists to get permission from the government, pay exorbitant fees, and navigate an obscure bureaucratic process before they can express themselves on their own property is a totally unwarranted trampling of their First Amendment rights,” said Alanah Odoms Hebert, ACLU of Louisiana executive director. “This ruling affirms that murals are a form of constitutionally-protected free expression – even when they depict the offensive, misogynistic statements of our President.”

The New Orleans Department of Safety and Permits sent Morris a letter ordering him to remove the mural or face punishment, including “a maximum fine or jail time.”

“Artists who want to create art on their own property shouldn’t have to wait around while bureaucrats decide whether the content meets some arbitrary standard,” said Morris. “Yes, occasionally we will be confronted with art we find objectionable, but those with delicate sensibilities still have the option of looking away.”

The City Code required that all proposed murals were subject to City review for content before a permit would be issued. In addition, a mural in a historic district or on a historically designated structure required approval of the Historic District Landmarks Commission.

Today’s ruling prohibits the city from enforcing these restrictions.

This press release is online at: https://www.laaclu.org/en/press-releases/federal-judge-strikes-down-new-orleans-mural-requirements

A copy of today’s judgment is available at https://www.laaclu.org/sites/default/files/field_documents/2019.07.09_feldman_order_msj_morris_v._new_orleans.pdf