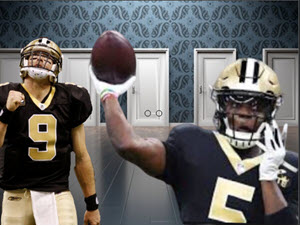 We’d seen an uninspiring Bridgewater in mediocre mop-up roles and late-season games that didn’t matter, so the best Who Dat Nation could hope for was to break even before Brees could return. Looking even further down the road, Bridgewater would likely punch his ticket for free agency, to nobody’s regret, and the Saints would likely go into the 2020 NFL Draft looking for their quarterback of the future.

And, boy, did I have the guy! And he wears No. 9, cementing a linkage with Brees. But they could give him 19! YEAH, that's the ticket. Johnny Unitas wore 19! Wow, kismet was working overtime! Yessir, LSU’s Joe Burrow was my guy!

Burrow had gone from a serviceable quarterback in 2018 to doing weekly impersonations of Bert Jones or, heck, Peyton himself! He makes good decisions, has an adequate arm and can pull the ball down and run himself out of trouble when necessary. Good Old Joe had been ignored by every mock draft outside the Burrow Family Mock Draft and Barbecue. The early mocks had a handful of familiar quarterbacks going in the first round: Bama’s Tua Tagovailoa, Georgia’s Jake Fromm, Oregon’s Justin Herbert and Oklahoma’s Jalen Hurts. Under my scenario, Burrow would be available at the lower end of the first round where the prescient and perceptive Saints will likely pick. In Burrow, they would snatch up the best bargain since BOGO Blizzards at Dairy Queen.

Who Dat Nation wants the Saints to do the magic they often do and keep Bridgewater as the Brees-in-waiting. The likelihood is even greater that Bridgewater will hit free agency, now with a resume that includes a 5-0 record for the NFC title contenders. Burrow has looked nearly as good and now is the king of Baton Rouge, the leader and inspiration of the No. 1 Tigers. And not surprisingly, Burrow has been discovered by the NFL Mock Draft mavens.

Today, Chris Trapasso of CBS Sports declared Burrow should be the top pick in the 2020 NFL Draft. I kid you not. That's Numero Uno. Top of the Crop. A slot worth maybe $40 million in 2020. That is major cheese! Quoth Trapasso: “Joe Burrow has been the best quarterback in college football this season, and we need to start talking about him potentially going No. 1 overall. For real. The LSU passer is completing nearly 80 percent of his passes at 10.8 yards per attempt with 30 touchdowns and four picks playing in the SEC. Goodness. He’s been mostly very poised inside the pocket and has flashed athleticism on scrambles. As a former top recruit, he has the inherent ability to be the top pick, and in this mock draft he goes No. 1 overall to the Cincinnati Bengals.”

So you are probably asking yourself: “Who WILL the Saints draft next year?” And my answer to you: “Draft? Draft? What do you mean Draft? It’s only October!”

More in this category: « A Morrall to the Teddy Bridgewater replacing Drew Brees story? No "Politically Correct" Himmacanes here in Louisiana »
back to top