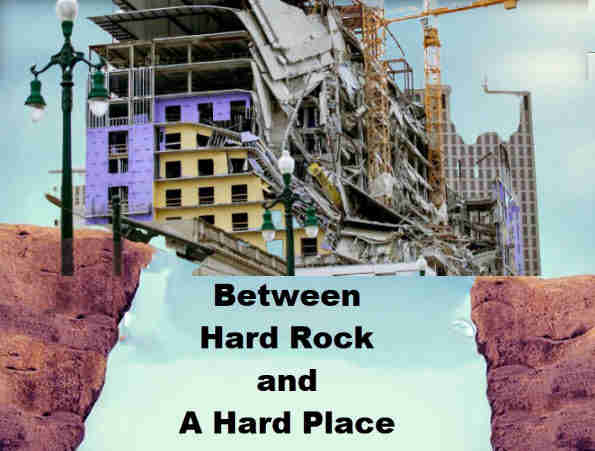 It has been three months since the Hard Rock Hotel collapsed on Canal Street, killing three workers and injuring dozens of others. Since that time, lawsuits have been filed, but very little has been done to demolish the partially collapsed building. After the collapse, an effort to demolish two large cranes on the building site only partially succeeded as one crane is still dangling from the side of the building. To make matters worse, the bodies of two dead construction workers remain in the building.

At this point, there are no definitive plans on when the building will be demolished. One delay has resulted from the desire of the Hard Rock Hotel owners, 1031 Canal Street Development Corporation, to demolish three surrounding buildings to give them better access to the Hard Rock Hotel. The demolition plan is being opposed by local preservationists who note that the surrounding buildings are historic and need protection, not demolition. Local preservationist Sandra Stokes of the Louisiana Landmarks Society is very skeptical of the demolition plan because “We have no trust factor in this company at this point.”

The demolition plans will be discussed at the next meeting of the Central Business District Historic District Landmarks Commission in early February. The Hard Rock Hotel owners asked for a delay until the February meeting because of the “very fluid situation.”

At this point, New Orleans Mayor LaToya Cantrell needs to show some leadership to resolve the situation. Not only are there questions about the remains of the victims and the status of the demolition, but there are also questions about what caused the collapse. Several lawsuits alleging negligence have been filed against the construction companies involved in the project.

The people of New Orleans should be informed about how this project was approved and why was there not adequate oversight of the construction process. A video taken by one of the workers prior to the collapse exposed both shoddy materials and slipshod construction practices. In addition, at least one of the construction workers was an illegal alien, who has already been deported to his native country of Honduras. This issue should also be investigated, and it would be worthwhile to note exactly how many illegal aliens were involved in the project. These problems need to be rectified to ensure it does not happen again.

At this point, a plan of action must be created regarding the demolition. For three months, a partially collapsed building has been a major fixture in the city’s skyline. It will remain standing for months to come because city leaders and the developers have not finalized plans regarding the demolition of the hotel or the surrounding buildings.

The family members of the victims and the citizens of New Orleans deserve much better.

More in this category: « Saints win over 49'ers could mend a broken heart of hateful memories Need cops, not Cantrell's Holistic New Orleans Crime Meditation Center »
back to top