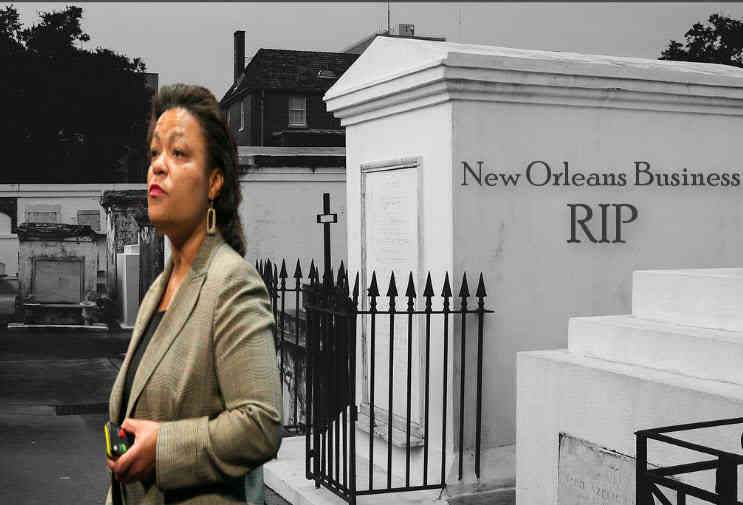 New Orleans Mayor LaToya Cantrell is a progressive Democrat schooled by the Aspen Institute to follow a very left-wing agenda. It should have been no surprise that she visited Cuba to learn about economic development or Ghana to study how to bring a slave ship attraction to New Orleans.

During this Covid-19 crisis, she has not disappointed her liberal benefactors. Every day, her decisions are following their playbook to seize more government control and limit the freedom of the people.

From delaying the reopening of the city to ordering police to establish checkpoints to harass motorists, Cantrell has seized the Covid-19 opportunity like a true progressive. While her city’s economy disintegrates, the Mayor dreams of new ways to control her citizens.

Her latest decree involves a requirement that New Orleans businesses keep track of all customers who enter their facilities. Thus, businesses struggling to survive will be forced to undergo extensive record keeping of employees and anyone who enters their premises. In this way, health officials will be able to track down individuals who have the misfortune of interacting with those people infected by the coronavirus.

Many New Orleans businesses have been closed for almost two months. It is imperative that commerce once again be allowed in the city or some of these businesses will not survive. This will lead to more unemployment and less sales tax revenue for the New Orleans city government.

Unfortunately, Mayor Cantrell seems to be focused on controlling the activities of citizens and businesses within New Orleans. The latest requirement is utterly ridiculous for it will place an undue burden on struggling businesses.

The Mayor’s order was issued to assist with the “contact tracing” of infected residents and everyone they interact with in New Orleans. Those who encounter residents infected with Covid-19 will be asked to quarantine for two weeks. Other measures expected of businesses will be masks for employees, temperature checks for patrons and social distancing for all.

The problems in New Orleans will not dissipate any time soon. In the short term, the Mayor has extended the economic shutdown of New Orleans until May 15. This is in line with Governor John Bel Edwards' executive order for the state. However, he did allow patio dining for restaurants with outdoor seating. Not surprisingly, Mayor Cantrell forbade New Orleans restaurants from taking advantage of this opportunity to bring back more business.

The real question is how will the city survive economically? The Port of New Orleans has been horribly impacted by the worldwide shutdown. Cruise ships are not operating any longer and may not return until 2021. The oil industry is enduring its worst crisis of all-time. All gambling casinos in New Orleans are closed.

The only major industry left is hospitality and tourism. Unfortunately, the Mayor strongly encouraged all events to cancel for the remainder of the year and threatened to cancel Mardi Gras in 2021. She might as well turn out the lights for the city of New Orleans.

This is a city that thrives on tourism and hospitality and the Mayor pretty much ended it. Cantrell is the best thing to happen to suburban parishes. They will benefit from people leaving New Orleans in droves.

Even when the complete shutdown is partially relaxed, the rest of the year looks bleak for the city. The city is trying to figure out how to deal with a $130 million deficit, but it will only grow worse in the days ahead.

It is no wonder the city finances are a mess for the Mayor has not been able to handle her own finances, which are in shambles. She used city government credit cards for personal expenses as a councilwoman and has not paid her federal taxes for several years, owing approximately $95,000 to the IRS.

Other areas of her leadership have been deficient. For example, it has taken her seven months to finally move forward with the demolition of the Hard Rock Hotel. Her administration deserves blame for the improper inspection of the building, which collapsed last October. It is no surprise that several inspectors have either resigned or been terminated for their pitiful oversight.

New Orleans needs a Mayor who can competently manage personal financial matters and a large city administration. Clearly, Mayor Cantrell is not capable of this type of leadership.

In addition, an effective Mayor is concerned about jobs and economic development, not just the “health” of the city. A failing economy is also a health issue as it will lead to increased poverty, more suicides and drug addicts and a host of other problems.

It seems the Mayor enjoys issuing edicts and orders to her poor and jobless citizens. At some point, the people of New Orleans will realize that they cannot prosper in such an environment. Many are becoming uneasy as they await the reopening of their businesses and the return to their jobs.

At the very least, worried citizens need to make their voices heard to the New Orleans City Council, which can overrule the Mayor’s shutdown order. Please review the work of our organization www.SafeOpenCoalition.org which is making a compelling case to reopen the city’s economy. It must be done both safely and quickly, the future of New Orleans depends on it.