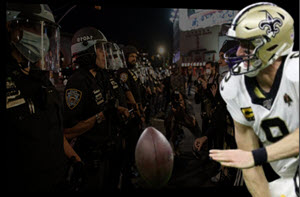 Sadly, there are several recent examples of this disturbing trend from the past week. In the NBA, veteran sportscaster Grant Napear was placed on leave from radio station KHTK and fired from his position as Sacramento Kings broadcaster. His supposed offense was tweeting, “ALL LIVES MATTER…EVERY SINGLE ONE!!!” This was in response to a tweet from a former player, DeMarcus Cousins, who asked for his “take on BLM?”

Napear lost his position despite his 32-year association with the Kings. In an interview with The Sacramento Bee, he explained that he was “not as educated on BLM as I thought.” In effect, in today’s hyper-sensitive environment, any comment other than full support for Black Lives Matter will lead to immediate dismissal from the politically correct world of the NBA, a league that features several coaches and players that regularly mock and insult the President of the United States. Their hateful comments are celebrated, not censured by a league run by leftists.

Unfortunately, the NFL is going down the same road as the NBA. The latest controversy occurred yesterday when future Hall of Fame Saints Quarterback Drew Brees had the audacity to claim that “I will never agree with anybody disrespecting the flag of the United States of America or our country…Is everything right with this country? No. We still have a long way to go…But I think that standing there and showing respect to the flag with your hand over your heart, it shows unity. It shows that we are all in this together, that we can all do better, and that we are all part of the solution.”

In the interview with Yahoo Finance, Brees referenced his two grandfathers who served in World War II. He said, “So every time I stand with my hand over my heart, looking at that flag and singing the National Anthem, that’s what I think about… thinking about all that has been sacrificed, not just those in the military, but for that matter, those throughout the civil rights movement of the 60s.”

This was an inclusive and unifying statement of support for the symbols and history of our country. Obviously, Brees should not have had to apologize for such patriotic comments. Expressing support for the American flag and the National Anthem is not controversial for most of our citizens. However, with many of the NFL coaches and players, Brees uttered a contemptible insult.

He disagreed with the actions of Colin Kaepernick, who led a protest in the NFL centered on police treatment of African Americans. His kneeling campaign spurred many other players to follow suit during the National Anthem. This created controversy, a decrease in attendance, and a decline in television ratings as many Americans were disgusted by the disrespectful behavior. Eventually, the players stopped kneeling and the controversy dissipated. In the light of the tragic death of George Floyd, more players will undoubtedly start kneeling again in the NFL next season.

A new controversy will lead to another exodus of fans, but the NFL does not seem to be concerned with the views of fans who view with disgust the disrespect of our national symbols. At least, the NFL can be comforted to know that Brees was appropriately penalized for his “controversial” comments. After enduring a barrage of criticism from current and former players, Brees gave an apology. He noted, “I would like to apologize to my friends, teammates, the City of New Orleans, the black community, NFL community and anyone I hurt with my comments yesterday. In speaking with some of you, it breaks my heart to know the pain I have caused.”

In the Bizarro World of sports today, showing support for the flag and the anthem is somehow racist. Brees is now in line, so he can continue to play quarterback for the Saints. If he did not apologize, despite his great career and incredible talent, it is probable that he would not have been allowed to play NFL football again.

In the world of sports today, there is no free speech, only liberal Groupthink. Anyone who deviates can kiss their playing or broadcasting career goodbye.