The Art of White Privilege in Cantrell's New Orleans Featured 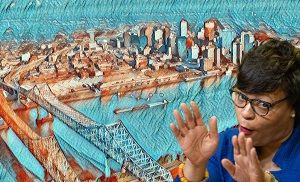 Regardless of the true situation, the administration of New Orleans Mayor LaToya Cantrell obviously believes that those who wield real “privilege” are the “white” residents. In an amazing press release the other day, the white New Orleans Health Director, Dr. Jennifer Avegno, warned about the problems of “privilege.”

According to Avegno, “There is also a misconception that this is a disease only affecting communities of color. It is true that our black and Hispanic residents have faced a disproportionate burden of disease and death so far, and eliminating those inequities remains a focus of the City and Health Department response. But, if you are white and privileged, COVID-19 is still coming for you, and to act irresponsibly because you think you may be safe is unconscionable during a pandemic.”

Obviously, Dr. Avegno feels sympathy for black and Hispanic residents, who face a “disproportionate burden” and “inequities,” but nothing but contempt for white residents who are “privileged” and “act irresponsibly” and are “unconscionable.”

Clearly, racism is alive and well at New Orleans City Hall as Avegno must be speaking for Mayor LaToya Cantrell. Such derogatory comments would never be made about other racial groups, only the privileged “white” community.

New Orleans has been extremely slow to reopen the economy after the onslaught of Covid-19. The Mayor has scolded residents for their behavior and is threatening to bring the city back to “Stage 1” if there is not more compliance with her directives.

At some point, it will be interesting to see who she is reprimanding? Who will be left in the city after this Covid-19 disaster is over? Many businesses have already closed their doors for good. It will take years for the tourism and oil industries to recover. To make matters worse, there are no new industries on the horizon for New Orleans. Sadly, the racism from the Cantrell administration might very well drive more citizens to leave New Orleans.

While the Cantrell administration is not very pro-business, there is one area in which they have been very accommodating. The city is wide open for protests, no matter how many participate. Yes, anti-monument and pro-BLM rallies are encouraged, but graduation parties are a cause of alarm.

When a statue was destroyed in Duncan Plaza recently by a large throng of protesters, the police did nothing until it was dumped into the Mississippi River. Maybe the administration agrees with activists that monuments are another form of white privilege.

Soon, all these monuments will be gone, but so will the history and attraction of New Orleans as a tourism destination. Joining the monuments and tourists leaving New Orleans will be thousands of residents and businesses.

It is sad that the Mayor sees racism everywhere but does not see that her policies are negatively impacting residents of all racial backgrounds.

More in this category: « Wave Tulane Goodbye, school named after huge Confederate backer Doling out Republican conventions to New Orleans »
back to top