Displaying items by tag: The View 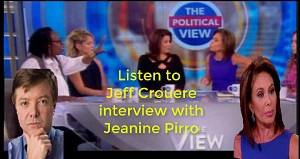 The people of the United States are not being very well represented by their broadcast and cable news networks. Except for Fox News, all of the other big news operations are decidedly liberal, even though the country is considered to be center-right politically. While there is a Republican in the White House and the party controls most state legislatures, Congress and has 33 Governors, most of the mainstream media stands in direct opposition.
Published in Donald Trump news
Tagged under
Read more...