If Louisiana Sen. Bill Cassidy hadn’t realized it after a decade in politics, he knows it now: these people aren’t your allies, much less your friends. 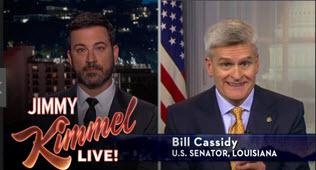 Some months ago, Cassidy remarked that he would like to see health care insurance reform pass a “Jimmy Kimmel test.” This referred to a sometimes humorous but politically vapid late-night television talk show host whose son was born with a heart problem. Having Cassidy on his show, Kimmel ventured the eponymous test should be “no family should be denied medical care, emergency or otherwise, because they can’t afford it.”

If so, the misnamed Patient Protection and Affordable Care Act (“Obamacare”) fails. It doesn’t provide such a guarantee because it leaves over 28 million uninsured, with more on the way as it continues to drive premium prices higher – up on average 60 percent since full Obamacare implementation in 2013. Further, the related Medicaid expansion does not increase the amount of medical care delivered because insurance and actual delivery are two different things.

Neither would a single-payer system work. Its estimated costs of $2.5 trillion annually– an increase of 40 percent over current U.S. spending – would require confiscatory tax rates on many American households. Even if taking all adjusted gross income over $1 million a year – which in reality would cause an economic contraction driving any estimates significantly lower – would bring in only $1.2 billion (2014 data). To reach that figure, a 90 percent marginal rate would have to apply to households over $200,000 in income – 42 percent of filers (and again assumes economic activity would not be dampened significantly that would drive down revenues collected).

So, Kimmel – a multimillionaire who has no concept of how the vast majority of Americans live their lives with far smaller incomes – because he completely misunderstands the complexity of the issue proposed an entirely impractical notion. But one that Cassidy fell for, who said reform should embrace the Jimmy Kimmel test even as no policy practically can.

Thus, the ignoramus Kimmel could claim, as he did recently, that Cassidy went back on his word that the budget amendment he and some GOP Senate colleagues have introduced would pass the test. If Cassidy had figured he could get political mileage out by aligning himself with a TV host watched by about 0.65 percent of the population, that blew up in his face.

Ironically, Cassidy has a fair argument insofar as the reason Kimmel gave for saying Cassidy betrayed him. Kimmel alleged that the legislation would allow states not to require insuring individuals with pre-existing conditions, but Cassidy noted that it requires any state seeking such a waiver lay out how it will maintain access to adequate and affordable health insurance coverage for individuals with pre-existing conditions.

But Cassidy must understand that any reform that does not entail grabbing lots of other people’s money to provide the masquerade of health care delivery – not to produce its actual delivery – and does demand both government and patient responsibility in spending that money is a non-starter with leftist charlatans such as single-payer proponent socialist Sen. Bernie Sanders and liberal yahoos like Kimmel. His idea doesn’t follow those parameters and criticizing it could boost anemic ratings, so Kimmel lets loose.

Welcome to the real world. The left is more interested in wealth redistribution than in making health care provision work better, and its members will use any one and any means to accomplish this goal that brings them more power and command and control over society to remake it into their own warped image. Cassidy now has an unambiguous reminder of that.

More in this category: « WHY? Florida has more threat, lower property insurance premiums than Louisiana Louisiana's Sen. Cassidy wants to kill Obama legacy, not fix healthcare »
back to top