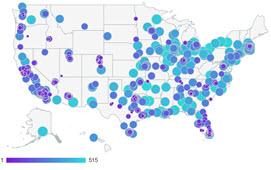 Last year, for the same WalletHub survey, New Orleans was ranked among US large 28th among large cities, this year, 24th.

Kenner Louisiana’s overall rank is 498th among all US cities. This year, it is ranked 195th out of 202 small cities. In 2016, it ranked 197th out of the fastest growing small cities.

Shreveport Louisiana is currently ranked 515th among all cities. Last year, it measured 232 among small cities. This year, among the small cities, it is scored at 249th, or, dead last in that category.

Metairie Louisiana, an outskirt of New Orleans is currently measured at 266th in growth among all cities. Thus, this year, that gives it a score of 140 for mid-sized cities out of 249 US cities. In 2016, it ranked 240th.

Lake Charles and Shreveport win the distinction of being at the bottom for poverty rate decreases. Shreveport and Lafayette are 512 and 515 respectively in GDP growth.

What is the methodology?

Finally, we determined each city’s weighted average across all metrics to calculate its total score and used the resulting scores to rank-order the cities in our sample.

In determining our sample, we considered only the “city proper” in each case and excluded cities in the surrounding metro area. We categorized each city according to the following population-size guidelines:

Adding insult to indignity, in the category of mid-sized cities, Baton Rouge is ranked 4th from the bottom and Shreveport, dead last.