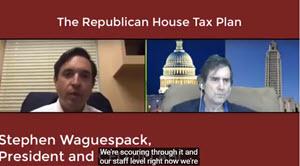 On Thursday, we had a great opportunity to see and hear how LABI's legislation-support process unfolds as we talked with the man in charge--Stephen Waguespack, it's President, and CEO.

Waguespack joined me in a Facebook Live discussion Thursday afternoon as we talked about the state and national issues the organization faces. During the interview, we also discussed those services and opportunities available for its members.

As fate would have it, yesterday morning, hours before the interview, the long-awaited Republican House of Representatives tax bill, put together by the House and Ways and Means committee, was released to the public.  Waguespack and LABI were already reviewing its provisions and so in the opening segment of the interview, we discussed the overarching features of the legislation and the benefits to the state.

Below is the transcript of the initial segment of the interview and the associated video.

On Monday, we will publish the second of the multi-part interview.

The House Republicans released a tax bill and so it's it's a large document. We're scouring through it and our staff level right now we're distributing some of our members to get their feedback.

WAGUESPACK: You know, we have so many different businesses of all sizes of our membership. I'm sure we'll get different feedback on it, but overall what I'm hearing is--our members are excited that this draft is released, they're excited that the prospects of this bill moving forward, and so we're working with our delegation up there on that issue.

The other piece is--we are, we have an event coming up pretty soon, we have the free enterprise awards dinner, we're gonna have pretty soon and quite frankly throughout the year, we have businesses that in our opinion, do great things throughout the year . And so what we've started as a free enterprise awards dinner, where we recognize those members, and so in a couple of weeks, we're gonna bring up the companies and the manufacturers and the economic development partners--have done great things throughout the year to help drive job creation in Louisiana. So we're gonna be announcing those award recipients tomorrow.  I won't let the cat out of the bag, but tomorrow we'll put a release out there, we'll talk about the companies and the individuals that we think, who have really helped move the ball forward on creating jobs in Louisiana and we want to recognize their efforts. And so those are some of the things we're working on.

We just came back from DC not too long ago.  We brought our board of directors up there to meet with our delegation and meet the US Chamber of Commerce and the National Association of Manufacturers, so we were grinding through policy and some of the important issues of the day up there and so we're always—we’re active on, on policy and events here at LABI.   So I guess, technically, this is our off-season since we're not in session but it never really slows down, we're always working on something.

SABLUDOWSKY: By the way the tax bill we had that information up on Bayoubuzz.  you can look on the front page, havIng said that-- in terms of tax bill, what is it that you that you find attractive about the tax bill in Congress that the House of Ways and Means just released

WAGUESPACK: Well it's, it's large documents or so-we're still going through the specifics of the bill, but I think what the concept of what they're trying to put together is exciting to us.  First of all, trying to bring some of those investments in dollars that are overseas back home--that's what we got to have as a country.  I mean right now over the years we have have a country. In America, we have put together a uncompetitive tax code, so what has happened is as the the state's economy and the nation's economy has become international, a lot of that investment has moved overseas because quite frankly they found better tax codes and better working environments over there.  We want those investments to come back home and so we're excited that the Congress has the same goal.  So we think lowering that top rate at the corporate and the business side to bring those investments back to our shores will help a lot. The other piece is--you know-- pass-throughs, trying to make sure that you lower rates for all Americans, you know, because a lot of businesses in Louisiana are small businesses--those are the type of businesses that quite frankly, they're their grind in each and every day on Main Street--trying to stay stay afloat and they pay their taxes quite frankly through the individual, the personal income tax code. So ensuring that that to those tax rates on the personal side, on the individual side that those are also lowered and reduced so we make sure that we catch some of those individual investors--we think that's important as well .

SABLUDOWSKY: Great great so what does Louisiana need, I mean, obviously, I think New York and New Jersey are a little bit disappointed right now--because of the deductions that they mean they may lose, does Louisiana have any concern about that?

WAGUESPACK: You know it's a long document, again, I understand-- and quite frankly they came out I think like 11:30 this morning-- and so that's one of the provisions we've sent out to our members and I'll be honest with you—we’re still in the gathering feedback phase and unfortunately this interview is happening the same day we got the document  So I'd hate to get ahead of our membership on that--I do think those those high income tax states like New York and California, you've heard are most critical of it because those are the ones that they're most dependent on those provisions, but again, we'll see what we hear from our members here as well.

SABLUDOWSKY: Okay, do you think…

WAGUESPACK: Then on some of state front here, you know because Louisiana has the ability to deduct federal income taxes from-- during their Louisiana taxes here-- depending on what happens at the federal level, if there is a pretty aggressive tax cut there, it can also, you know, lead to actually less of a deduction here in Louisiana--so we're also monitor what the bottom line impact would be for an individual, for a family, for a small business here in Louisiana. If the feds have a big tax cut, that could try to promote growth in a state like Louisiana, at the same time, that's going to lessen a deduction that a small business or an individual or a family can have here, it may not actually help the bottom line impact, it may have in other states.

Shortly after the Facebook Live interview, LABI released the following regarding the efforts being made and aforementioned legislation, in general:

The Louisiana Association of Business and Industry (LABI) issued the following statement in response to the unveiling of federal tax reform legislation.

“LABI is pleased to see that growing the American economy is a top priority in Congress. The tax legislation released today seeks to bring jobs and opportunities home for American workers and businesses alike. LABI supports this effort and looks forward to working with the Louisiana delegation to enact generational tax reform.”