Edwin Edwards v. David Duke--Louisiana Race From Hell and Back 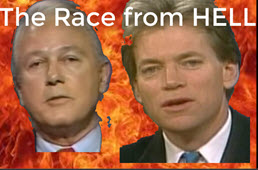 Twenty-six years ago this week, perhaps the most consequential and controversial election in the nation’s history took place here in the Bayou State.  Edwin Edwards and David Duke squared off in a run-off election for Governor.  Not only were voters across the nation fascinated by what was taking place down in the deepest of the deep Southern states.  There was worldwide interest in a showdown between a controversial former Governor and the former head of the Ku Klux Klan.

Incumbent Governor Buddy Roemer was squeezed out of the runoff, as Edwards outflanked him to the left and Duke overwhelmed Roemer among conservative voters.  Louisiana is the only state in America that has a convoluted election system where all candidates run against each other the same time, irrespective of political affiliation. It’s been called the  “jungle primary,” and was the downfall of Roemer.

He tried to run as centralist, and you just can’t do that under Louisiana’s current system. I know this from personal experience as a candidate for governor, as I was cut out in the same convoluted system four years earlier.  Roemer was left on the sidelines as the showdown pitted conservative white Louisianans against populist southern democratic voters, with moderates stuck in the middle trying to figure out just what was the least offensive vote to cast.

I had an up-close view of the race as I was running myself statewide for Insurance Commissioner.  My path would cross with both candidates several times a week as we each crisscrossed Louisiana in our efforts to garner votes.  It was retail politics at its best as all the statewide candidates “pressed the flesh” at fairs, parades, festivals and campaign rallies all over the state.  Today, candidates try to influence votes by raising money and going on TV.  It’s a sad commentary on the current political atmosphere that those who hope to get elected generally ignore the chance to get out and visit with voters.

A surreal moment took place for me a week before the election.  My wife and I took a break from our own campaigning, and drove over to a large crawfish restaurant in Breaux Bridge with some friends.  I felt comfortable that I would win handily in my own race for insurance commissioner, and we just wanted to get away from all the campaigning. Some of the locals recognized me, but our group mostly stayed to ourselves in one of the corners and focused on enjoying the crawfish.

Just as we got settled, Edwin Edwards walked in the door. He made a beeline for our table, took a seat, ordered a tray of crawfish, and, in typical Edwards fashion, began entertaining our group and surrounding tables with his Cajun humor. Not 10 minutes later, in comes David Duke. Spotting our group, he too joined us as the whole restaurant focused on our table.  The banter and joking went on for a good while between the two candidates.  Then they each went to their own separate tables.  In the next hour, patrons of the restaurant lined up at the tables of their chosen candidate, either Edwards or Duke, often leaving a cash donation.  Just another night on the campaign trail.

Edwards went on to soundly defeat Duke receiving 61% of the vote, served out his fourth term as governor, went to jail, ran for Congress, had a new son at the age of 86, and today, at 90 years of age, seems as lively and engaging as ever. His recent birthday party was a sell out at the ballroom of a local hotel, and a recent poll pegged him as the most popular living governor in Louisiana.

Duke also went to jail, ran for U.S. Senator in 2016, and continues to rant about white supremacy.  He was a factor in the most recent presidential election after Duke endorsed Donald Trump, and Trump refused to disassociate himself from the former Klan leader.

Gubernatorial elections in Louisiana are never bland and boring.  Remember current Governor John Bel Edwards’ verbal attack on opponent Senator David Vitter in the 2015 governor’s race debate?  “You are a liar, a cheater and a stealer, and I don’t tolerate that.”

But it will be hard to top the Edwards-Duke knock-down-drag-out election of 1991 that will go down in history as “the race from hell.”