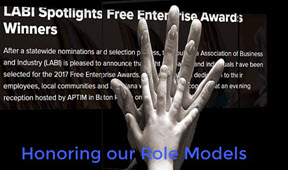 by Stephen Waguespack
President and CEO of Louisiana Association of Business and Industry
In 1993, professional basketball star Charles Barkley made headlines when he used a Nike commercial to say, “I am not a role model…. just because I can dunk a basketball doesn’t mean I should raise your kids…. parents should be role models.”

These were quite controversial comments at that time. While some agreed wholeheartedly, many saw his comments as an excuse for perceived bad behavior on his part and that of several other athletes during that era.

Louisiana Tech legend Karl Malone said of his colleague at the time, “Charles, I don’t think it’s your decision to make. We don’t choose to be role models; we are chosen. Our only choice is whether to be a good role model or a bad one.”

Kareem Abdul Jabbar was quoted as saying, “As a parent, I have a job as a role model to my children, and by extension, to other young people.”

I think these then-future halls of famers were right in their own way… and today’s environment only emphasizes that point more clearly.

Even Barkley was on to something. The America of today is in desperate need of some good role models, and our most pressing vacancy is in the home. Too many parents are not effectively parenting, and a generation of kids are coming of age without the same level of manners, soft skills, work ethic, education and respect for their fellow man that we typically saw not that long ago.

If role models are hard to find inside the home, where do kids find them outside of it? A growing number of our political leaders fail to live up to the same level of civility and statesmanship as their predecessors once did. Too many entertainers and athletes today literally market and exploit their negative influence on today’s youth for personal gain and fortune. Social media is becoming a race to the bottom. Traditional media responds to that same toxic demand by increasingly ignoring stories of inspiration and instead focusing more on a daily diet of unrest, crime, scandal and name-calling.

Role models are in high demand yet they are unfortunately becoming harder to find. Perhaps it’s time to go back to the basics.

Let’s start saluting soldiers and veterans again, thank them for their service and tell stories of their heroism. Police officers, firefighters and other first responders risk their lives every minute of every day to help the strangers that live among us…perhaps it’s time to tell their stories, listen to their families and learn from their daily interactions with mortality. Teachers that try to instill discipline in our children need to be supported and praised, rather than second-guessed and undermined. Businesses that grow and invest in our communities should be viewed as a critical local partner rather than an easy, poll-tested scapegoat for all of society’s shortcomings.

We used to emulate the military, first responders, teachers and business leaders. We used their experiences to teach the right morals and convictions in our children. Is that the case today?

This week at our annual Free Enterprise Awards celebration, the Louisiana Association of Business and Industry (LABI) recognized several business and industry leaders that have proven to be good role models and inspiration in Louisiana.

Roland Toups with Turner Industries was awarded the Ed Steimel Achievement award. Steimel, a businessman who became a strong voice for decency, morality and reform in Louisiana from the 1970’s through the turn of the century, was a strong proponent for higher education and served as the initial leader of both the Public Affairs Research Council (PAR) and LABI. Roland Toups has been just as much a successful businessman and moral community leader as Steimel was, lending his time, faith and effort to help others time and time again during his fifty years with the company.

Jay Lapeyre and John Finan were both awarded the Free Enterprise Champion award, thanks to their efforts to reform how we assess, treat and train those offenders ready to re-enter society, as well as the countless civic volunteer positions they have held over the years to treat our sick, rebuild our cities and protect us against waste and abuse.

Donny Rouse was recognized for his actions to help those in need in the days after Hurricane Harvey, the type of largely unnoticed action taken by so many Louisiana businesses each time our people face adversity.

Graphic Packaging International, Inc. and the North Louisiana Economic Partnership (NLEP) were recognized for the tremendous impact they are making to the economy in that region. Dow Chemical’s $2 billion in new investments focused on two Louisiana parishes were heralded and lauded, as well as the family-owned Cajun Chef Products, Inc. for the civic value they provide in St. Martinville. Christel Slaughter with SSA Consultants and the “Louisiana Calling” initiative they designed was singled out as an effective tool to help place young adults in the training they need to get a good job right here at home.

The fact is I am proud of the countless efforts throughout the year businesses big and small make across Louisiana. Hopefully, you share that pride. These businesses sponsor the local clubs, charities and ball teams. They invest in families and are the largest taxpayers in most communities. They make our products, hire our people and pay our bills. Every day they do it all again.

Role models used to be everywhere. Not so much anymore. Ask yourself…who in your area is the type of person you would like your child to emulate? Don’t be surprised if the person that comes to mind is one you have lost sight of over the years rather than the one you spend most of your day watching, listening to or reading about these days.

More in this category: « Edwin Edwards v. David Duke--Louisiana Race From Hell and Back Phil Robertson is a great Louisiana Duck but no Terry Bradshaw »
back to top