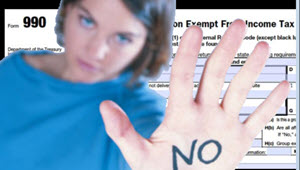 The Louisiana Association of Non Profit Organizations is taking issue with one specific provision that is in the House of Representatives that would hurt the mission of these types of organizations and “would radically change the longstanding, vital protection in law for nonpartisanship of charitable, religious, and philanthropic organizations”.

In short, if passed, the legislation would politicalize the non-profit organizations' existences.

Below, here is a statement sent out by Katelyn Smith, Member Services Manager

The House and Senate have passed separate versions of tax reform. The difference between the bills must be negotiated in what’s called a conference committee made up of a dozen or more Representatives and Senators who will be named soon. We write asking for your help in convincing all in Congress, and particularly the “tax conferees,” to preserve nonprofit nonpartisanship and to reject any changes to the Johnson Amendment.

Each bill contains multiple provisions that would harm the ability of charitable nonprofits to advance our missions. The most damaging is Section 5201 of the House-passed bill; it would radically change the longstanding, vital protection in law for nonpartisanship of charitable, religious, and philanthropic organizations, known as the Johnson Amendment. Section 5201 would allow political operatives to pressure those organizations to endorse or oppose candidates for public office, and powerful donors to exert even more pressure by giving or threatening to withhold charitable contributions to get the organizations to endorse or oppose candidates the donors prefer. The proposed change would also make political donations – for the first time ever – tax-deductible when funneled through charitable nonprofits, houses of worship, and foundations.

The Senate respected, but the House blatantly ignored, the widespread and resolute opposition to changing the law expressed by religious denominations and faith leaders, law enforcement officials, charitable nonprofits and foundations, and the vast majority of the American public.  As the National Council of Nonprofits has warned, “This shameful attempt to advance the self-interest of politicians for more money and control at the expense of independent civil society must be stricken from the tax bill that comes out of the conference committee.”

All people have a vested interest in preserving the independence and nonpartisanship of the charitable and philanthropic sectors. We urge you to immediately take these steps.

Step One: Call your Representative and Senators (Capitol switchboard: 202-225-3121) and deliver this important message:

“I’m a constituent and I’m calling in opposition to a very harmful provision in the tax bill that would weaken the Johnson Amendment and politicize charitable nonprofits, houses of worship, and foundations against our wishes. The harmful provision is Section 5201 of the House-passed tax bill that is now in a conference committee with the Senate. It is imperative that Senator/Representative [NAME] reach out to every member of the conference committee and tell them the Johnson Amendment language in the House bill must be stripped from the final bill. Thank you.”

Step Two: Send this message as an Action Alert to your board members, employees, volunteers, and the people you serve and encourage them to join you in speaking up to preserve the independence and nonpartisanship of the charitable, religious, and philanthropic sectors.

Read 1362 times
Tweet
Published in State of Louisiana
Tagged under