Congressman Garret Graves, that Louisiana Coast, those Fishers and the Endangered Species Featured 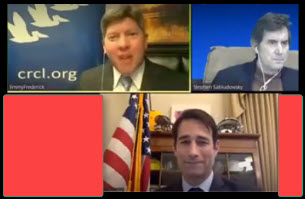 Louisiana's Coast and the Mississippi River: Such an incredible asset for the state and the nation, but due to coastal erosion and other infrastructure complications, how do we handle such an important issue on the national stage?

Enter a young man, hailing from Baton Rouge, who knows a thing or two about water management and important related natural resources,.

I believe Louisiana could not have a more knowledgeable Congressman on Coastal issues that Garret Graves, who represents the 6th Congressional District of Louisiana.  He has been working on water control matters after a major flood occurred in 1995, when he was working for then-Congressman Billy Tauzin.   He became the Chairman of the Louisiana Coastal and Restoration Authority under Bobby Jindal, which is when I first met and interviewed him in January 2009. At that time, he represented the Governor's Office at a ceremony at a major New Orleans Hurricane Katrina-rebuild pumping project.

Now, he is a US Congressman and is taking this body of knowledge and experience to serve our state and nation on a variety of related topics.

On Wednesday, Jimmy Frederick, Communications Director of the Coalition to Restore Coastal Louisiana (CRCL) interviewed Congressman Graves about the Louisiana coast. The interview took place on Facebook Live and was streamed to the CRCL,   to the Restore the Mississippi River Delta organization, and to the public.

Below is part one of that interview with Congressman Garret.  Part two will be published tomorrow.

JIMMY FREDERICK: I want to just really quickly introduce you a little bit to our audience and of course you're the 6th district congressman that encompasses 13 parishes from north of Baton Rouge all the way down to the Gulf of Mexico and you sit on the House Committee of Transportation and Infrastructure and Natural Resources and you chair the Subcommittee on Water Resources and Environment and of course the former chairman of the coastal protection restoration authority under Governor Roemer, excuse me—excuse me under Governor Bobby Jindal-- and also a classmate of mine background Lady of Mercy and Catholic High and "Go Bears", right?

JIMMY FREDERICK: Hey listen, really appreciate your being her. Before we get into some of the coast stuff, I do want to say I think there's an opportunity for some congratulations on HR 200 that passed the Natural Resources Committee--it had a lot of your language in it from from the Modern Fish Act that you had proposed earlier in April--just wanted to get an idea what that means for anglers in Louisiana?

CONGRESSMAN GRAVES: Well you know it's really interesting Jimmy--when you look at the number of fishers in the Gulf of Mexico as compared to the West Coast, that's compared to the East Coast, in Alaska, in Alaska has less than a million fishing trips a year, the the West Coast with Washington, Oregon, California--the huge population densities they have there--they were around five and a half million trips a year--Gulf of Mexico over 20 million.  So, there's a recreational fishing participation we have in the Gulf, the bounty of the Gulf of Mexico largely related to the production of our coastal ecosystem is the State of Louisiana--it's really extraordinary, a lot of people are partake in that--it's just, it's an extraordinarily different demand level.  And so what this bill does is it helps to ensure that proper balance with recreational fishing, commercial fishing, charter and it importantly uses the best science to make sure we have sustainable fisheries moving forward for generations.

JIMMY FREDERICK:And that really is the key term for us here in Louisiana--is best science--our blueprint, our coastal master plan, which you were a major part of, of the first one of course, subsequent ones after that, but Louisiana is really leading in in coastal restoration not just in our area but in the world and that is pretty special

CONGRESSMAN GRAVES: It is and unfortunately, as we as we all know Louisiana Cajun gets rated number one in different criteria--and usually that's good--sometimes being number one is not where you want to be, meaning the worst in things in some instances. This is a situation where Louisiana is absolutely a national leader, the national leader in sustainable coastal ecosystems, sustainable coastal communities. Other countries, other states come to our--the State of Louisiana and asked us for guidance for advice and the coastal master plan, our master plans that have been done, of course the latest one this year are are really on the edge of integrating science technology and in policy it's stuff that we should all be proud of.

JIMMY FREDERICK:The cornerstones for those master plans are large-scale sediment diversions. We're closer than ever.  CRCL (Coalition to Restore Coastal Louisiana) has been calling for--for those sentiment diverges since 1989 just a year after we were we were formed. We're going to be celebrating our 30th anniversary coming up in January pretty excited about that.  But, the point is that it's a very complex permitting process and I guess the question for you at the federal level is--is there anything we can do to kind of help speed that up? I know it's not the first time you've heard that question.

CONGRESSMAN GRAVES: Yeah.  you know laws they're in place today things like the "Marine Mammal Protection Act", the National Environmental Policy Act, wetlands regulations related to section 404 the Clean Water Act--those laws largely came into place in the 1970s and beyond.  Had those laws been in place back when the Corps of Engineers was building levees on a river system we probably wouldn't be in the predicament we're in today where we've lost nearly 2,000 square miles of our coast.  So the same laws that actually would have would have helped to protect our coasts in the 1930s where these levees are built, today, in many cases they're actually impeding our ability to move forward.  The National Environmental Policy Act--we're studying the impacts to the environment of restoring the environment, restoring the coast.  These projects are designed to benefit the environments of benefit ethological productivity, to benefit fisheries and birds-- and other things that are so important to the Sportsman's Paradise and then during the time it's taking us to go through these studies and evaluations we're losing more of the coast. Same thing with Marine Mammal Protection Act, same thing in some cases with essential fish habitats where National Marine Fisheries Services is saying that areas that are are now open water but years ago were land, we now have to give deference to the fish.  It's like, well wait a minute, why are we mitigating for the fish, when the fish didn't mitigate for the people.

CONGRESSMAN GRAVES: So trying to work through these laws to make sure that they're working in an effective manner to truly benefit the environment not to get in the way of projects designed to restore our coasts and our communities in south Louisiana

(To learn how Congressman Garret Graves answers that question, and how the partisanship in the country is hurting Louisiana on these issues, watch the rest of the video. You can scroll to the 6:34 mark and watch.  Or, of course, you can watch the entire segment from the beginning.

More in this category: « Tis the Senator John Kennedy vs. Gov. John Bel Edwards slugfest, once again Tauzin, Breaux and Alexander whine, carp over Congressional partisanship »
back to top