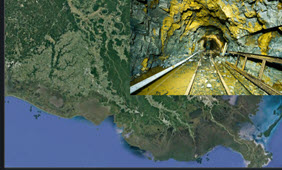 In part 2 of the interview with Jimmy Frederick, Communications Director of Coalition to Restore Coastal Louisiana, Congressman Graves discussed the dichotomy of these needs and opportunities and from a Congressional level, the infrastructure overview and how Louisiana fits into that big picture with Congress and President Donald Trump.

The Facebook Live interview was streamed to various pages including our Bayoubuzz.com website with the assistance of the Coalition and with the help of Restore the Mississippi River Delta.

Here is part one of the interview, Congressman Garret Graves, that Louisiana Coast, those Fishers and the Endangered Species

Below is the transcript and Video from the Facebook Live discussion:

JIMMY FREDERICK: One of the interesting things about this issue especially in Louisiana is that you've already mentioned it's not a partisan issue, but it's also not environment versus economy and that is something I'm not so sure that the rest of the country understands.  We understand the symbiotic relationship we have here in Louisiana.  That's why it's got to be saved I would imagine that's something you try to talk about a lot?

CONGRESSMAN GRAVES: We do and Jimmy you're exactly right and people have tried to make this a partisan issue over the years and thankfully our delegation, our state and many others that have resisted that temptation to do so.  You know if you go back to perhaps before Hurricane Katrina, there were just a handful of us that were out there talking about the coasts, and decades before that who you had even fewer--just a small handful of people--but largely before Katrina it was considered an environmental issue--it was the tree huggers that were out there talking about the coasts.  Katrina I think was that pivotal moment where people realized, oh wow, this isn't a birds and fish problem it's not a habitat problem, this is something that affects every socio-economic class, every race, every neighborhood, every coastal parish and it really--I think that Hurricane Katrina, Hurricane Rita caused sort of that transcending event that really made people realize--this is not about the environment.  This is about everything that that's great about South Louisiana.  It's about my home my business my economy the place I like to fish and many other things that's just a pervasive issue and and I think that was the turning point and I'll say it again--thankfully we've been able to do it, especially in these these uber partisan times were seeing today--we've been able to resist temptations to make this a partisan issue--Republicans, Democrats, independents--everyone have been, we've all been working together to, to advance the restoration efforts and protection efforts in the state of Louisiana.

JIMMY FREDERICK:  And the more I talk with you and others and realize how important Louisiana is not just to Louisiana but to the country and all the energy production, the fact that we--you know all-- everything we do I mean when you think about how Louisiana is--it's got to be something that is kind of hard to get through some of the minds of some of the people you deal with on a daily basis

CONGRESSMAN GRAVES: And Jimmy--one of the things about being up here in Congress, obviously you have all 50 states represented, you have the different territories represented, and so I I hate to say that there's a you know a comparison or a battle or a competition--but you know--oftentimes you'll be sitting in meetings and people will say oh well yeah--you know and pick a state--and in Nebraska we do this this and this, and (inaudible)--Louisiana is a gold mine, and in it it almost takes a situation like this, where you have--is comparison and contrast for all these other states to recognize really what an asset we have in the state of Louisiana and the natural resources are amazing, of course--the river system, the infrastructure we have related the transportation--I mean just really some incredible assets we have the state.

JIMMY FREDERICK: I know you might be having to get to a vote but I want to try to get a further things you and so I understand completely if you got to run--just talking about a lot of other people around the country especially coastal communities are realizing that things are changing for them and with the limited federal dollars that actually exists and will exist into the future how does Louisiana leverage what we've already done to make sure that the we're not "The Forgotten"?  And I got it, and I'm gonna come back to GoMesa in just a second I don't want to forget about that

CONGRESSMAN GRAVES: Wait,  how do we--I wanna make sure I understand the question--how do we leverage what we've done?

JIMMY FREDERICK:  I guess what I'm trying to get at is the fact that, we've been doing this for a long time we've been doing this for 20 or 30 years now, and now we're getting to a point where a lot of other people are having to do the same things that we are, and the funding I guess it's all about funding, it's all about funding--and the the unfortunate thing is, is the oil spill is a terrible thing, but if we hadn't had it, we wouldn't have the funding stream that we have now.  So we'd been a much worse spot

CONGRESSMAN GRAVES: Okay, got it.  I understand now.  So number one, years ago when I was when I was working for the State of Louisiana, we were we have literally pulled together tens of billions of dollars in funding and one of the things that I recognized is as you've indicated--we are on the edge of this, we're the canary in the coal mine in regard to what we're doing in South Louisiana.  It's a scenario that other states and territories and countries will be experiencing in the future, we're on the edge of this unfortunately because of our our extraordinary subsidence rates, are sinking rates, and in addition to the sea rise, we're again, we're the "canary in the coal mine" and so so what we did is--we established the Water Institute of The Gulf and the idea was--we need to have an independent entity that could be our science, coastal science and resilience guru our center of excellence and so we created that Water Institute--I'm not sure if you seen the amazing buildings popping up just on the the downriver side the the Mississippi Bridge and Baton Rouge--

CONGRESSMAN GRAVES: that's right, you are--in the Water Campus Building.  I checked out your digs the other day.  But having a physical center of excellence where you integrate government and academia and the private sector, not-for-profit expertise, all in one location, the Netherlands went into a somewhat comparable situation decades and decades ago.  They have Deltari's.  They have the rich water stat, their Core of Engineers equivalent.  We need to make sure that we're learning, that we're learning from the mistakes we made and learning from the successes and we're building upon those.  We're exporting those to other states, to other countries.  So that's one thing they were doing, but in addition to that, we are continuing to work to educate other members of Congress, other policymakers departments.  We just had the secretary of the United States Department of Interior Ryan Zinke down in Louisiana about two weekends ago.  I took him out to our coast to Davis Pond, had him meet with community leaders and business leaders and political leaders and others talking about the the national repercussions of our coasts and so I think it's going to take that sustained education effort, the sustained trips down to Louisiana and I think the continued active involvment and expertise of the Water Institute, the Coalition and others to ensure the rest of the nation that the things we're doing with these dollars, are responsible, they're based upon best science, and they're truly investments, not pork spending--meaning that this isn't just spending, this is investments that generate a return and cost savings, ecological productivity and resilient convenience.

JIMMY FREDERICK: Going back to sticking with funding a little bit, one of the things that that we have put together along with our partners at the Mississippi River, excuse me, before the Mississippi River Delta, is our 17 major priority projects--you've probably seen those and and some of those are sitting idle right now because there is no funding--is there anything on the horizon that might change that?

CONGRESSMAN GRAVES: Well, so one of the things we're working on and it actually started working on about a year ago, but you might have heard the president talk about the infrastructure packaging--usually the term infrastructure brings visions of roads and bridges which certainly in Louisiana we are in need of--bridge across the Mississippi River for one,but what we did is we began engaging the then--Trump Campaign and since then the White House, talking to them about what infrastructure really needs.  Some roads and bridges?  Absolutely.  But it's not relegated to that.  Things like and this is a sort of the way that we have sequences---said we'll look, why don't we start with roads and bridges and then we'll start talking about navigation dredging and the reason for that very quickly, is that the Panama Canal is now wider and deeper it can facilitate vessels that do not fit in the Mississippi River.  We have five of the top 15 ports in the nation. We need to maintain that maritime industry.  But here was the thought process--if we can get them to realize that ports and river dredging-- is an important part of infrastructure and trade in our economy, then we then, when we dredge those navigation channels, we have what?  Sediment.  Well then we naturally cascade into the next thing--"well hey, you know Mr. President, now we have the sediment, we have some ideas what we can do with it.  We can use it to restore the coast.  And so, we kind of will do this progression with White House officials and the campaign at the time, talking to them about this.  So, we've had very good discussions about--what infrastructure is? For structures roads and bridges infrastructures, ports and dredging and navigation channels that maintain these--Port of Baton Rouge, Port of  South Louisiana, Port of New Orleans and other ports in our state--that are major jobs creators. But it's also about it's about restoring our coasts and resilient communities and sustainable ecosystems, because Jimmy, those are cost-effective investments--I mean do we really even need to, people in Louisiana understand this, but you know people in Texas-- I think with hurricane Harvey, the impacts of Hurricane Maria and Irma in Florida, in Virgin Islands in Puerto Rico, time after time after time--we could have spent a fraction of the money on the front end, making these--more resilient--versus spending absurd amounts of money on the back end--just to throw out a dollar figure since 1980--over 1.3 trillion dollars spent on responding to disasters--a fraction of that money invested in proactive principled restoration projects levees and others would have saved exponential dollars