If Louisiana privatized some roads, bridges we'd be rolling in the dough? 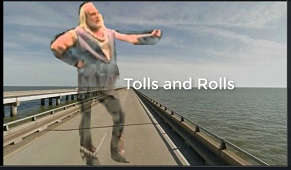 In Louisiana, a number of Jefferson and St. Tammany Parish officials were aghast a few years ago over a proposal to sell the Causeway Bridge that goes to the North Shore across Lake Pontchartrain. When the state’s largest paper, the Times Picayune, mixed the idea editorially, one elected official after the other fell all over themselves running away from even any talk of such an atrocity.

“That is the most ridiculous thing ever heard in my life,” said one Jefferson councilman. “I’m just flabbergasted that is even being considered,” said another. The gang at the Times Picayune took the final blow by editorializing that “this bad idea can’t die fast enough.” So why on earth would any public official even consider such an idea?

I might offer two reasons. The state is broke and there is a backlog of some $14 billion to build and fix roads.  A number of developers have told me that they see no predictable solutions in the near future.

Secondly, the sale of roads, buildings, sewer systems and a number of other publicly built projects are being sold to private groups in more progressive states all over the country. New projects are regularly being bid out to private groups to either lease or own. It’s the wave of the future, not just in the U.S., but also in industrialized countries worldwide.

In Virginia, the major interstate south of Washington, DC is a toll road built by a private investment group. In Detroit, there is an ordinary four-lane bridge in the busiest commercial border crossing in North America, carrying one-third of all road trade — or more than $122 billion in goods a year — between the two countries. It is owned by one man and his privately held company.

Airport rail links like the Chicago Skyway and the new California South Bay Expressway are examples of many privately owned toll roads in the US. Privately owned toll roads have been popular in Europe and Australia for years. In Chicago, the mayor auctioned off the city’s Skyway Transportation system for $1.8 billion.  And take a look at Indiana. Facing a $3 billion transportation-funding shortfall, the state auctioned off the rights to operate the Indiana Toll Road to a private group for a mere $3.85 billion.

Estimates have been made by the U.S. Department of Transportation that worldwide there have been more than 1100 private-public deals in the transportation field alone in the past 20 years, with a value of some $360 billion.

So what gives here? The Wall Street Journal asks the question recently as to whether there is any legitimate concern that private operators are only interested in making “money at the expense of taxpayers, and that new owners will skimp on maintenance and repair work in order to squeeze profits out of these operations?”  Progressive states around the country have dealt with these objections by building in restrictions and operating requirements to the contract which allow any such deal to be canceled and the roads and bridges taken back if “operators do not live up to the terms.”

If you want to be a bit cynical about those who oppose private ownership, one might wonder whether those objecting are looking to maintain their hold on public assets, especially since the commissions that often run these public authorities, as we have often seen, can create real job-patronage mills. And who is really happy with the condition of roads and bridges throughout Louisiana?

Here’s what the Wall Street Journal has a say about private ownership of bridges and highways. “For the first time in over a generation, America’s mayors and governors are looking at a realistic way to jump-start spending they’ve neglected for too long. Such deals bring welcome benefits to the transportation sector.”

Louisiana is facing a massive backlog of road and bridge repairs, as well as new construction needs. It is completely unrealistic to think that Governor Edwards and the legislature will be able to find enough new revenue to deal with this huge transportation problem. Rather than limping along, other states are becoming aggressive and proactive in bringing in the private sector.

We need less parochial grandstanding and more vision by those who are elected to serve us throughout the entire state. Here’s the question to ask: “Does anyone notice the risk of inaction?”

“A new leader has to be able to change an organization that is dreamless, soulless and vision-less … someone’s got to make a wake up call.”
– Warren Bennis