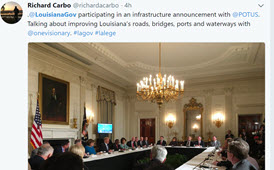 The plan involves the state’s to invest in the infrastructure improvements, an endeavor, states such as Louisiana could have a difficult time attaining with its huge budget deficits.

The President’s plan to rebuild America
America has long been a Nation of builders, President Trump told the country January 30 in his first State of the Union Address. “We built the Empire State Building in just 1 year—is it not a disgrace that it can now take 10 years just to get a permit approved for a simple road?”

He called on leaders of both parties in Congress to come together to deliver the safe, reliable, and modern infrastructure that Americans deserve. Today, he will outline his legislative principles to accomplish just that:

“We will build gleaming new roads, bridges, highways, railways, and waterways all across our land,” President Trump said. “And we will do it with American heart, and American hands, and American grit.”

NOW BACK HOME
Today, Political consultant and Public Relations expert Ronnah Gray along with former Statewide elected official, Jim Brown, and I talked about the infrastructure plan. The big question, of course, is how will Louisiana pay for its own contribution. Below is a short excerpt of the discussion::

SABLUDOWSKY:
Our Governor John Bel Edwards and he's taking part-- so you think that infrastructure could possibly be the issue that brings this country together--that sorely needs to be brought together.

JIM BROWN: Well, Steve. My thoughts is look--we all agree and i think that most of our viewers will agree that really that a massive infrastructure problem in this country I fly into the New York to the airport, La Guardia airport that just a mess!! It just needs massive, build up up that way. We can look at roads in the highways. I travel from Covington, across Louisiana on a bumpy I-10 that just needs so much work. The bridge work, circular areas around around this way. What what new orleans, for example, me just sewers and water reconstruction, so it's massive. On the other hand, hand I'm not sure the lightning rod that really defines the parties. I think that everybody thinks--"Look. They've all been up there, haven't done much about the of infrastructure. That needs to be done, but I don't see it as a rerepublican, a democrat issue or lightning rod issue that gets people really excited. I think you poll it. Do we need to be more in the structure. People would say yes, but if you get into difference between republican, democrats, is this going to be a reason why you vote for against your congressman, I just don't think it hits home at that level, quite frankly.

RANNAH GRAY
I think The fights gonna break out, steve or how to pay for it. And everybody wants these things and realizes. We need them, but about wants to really pony up and pay for the things, the billions and billions of dollars and then, where the partisanship is going to come in-- and probably both parties, probably won't be partianship but both parties will be guilty-- is they're going to go after these projects for their districts. They're not going to look at the big picture--they're going to go after getting the bridge in their district, getting a road widened, because-Jim's right, we--have just billions and billions of dollars of needs and there won't be enough money to pay for everything so the fights gonna break out over who gets the project--that's where the real wheeling and dealing is gonna go on. I'm glad our governor's gone to Washington with the president for this discussion today because to me Louisiana should be a poster child for infrastructure needs in America today.

Watch more of the discussion about infrastructure by watching the Youtube video, starting at the 8 minute, 29 second mark.

MORE ABOUT GOVERNOR EDWARDS AND INFRASTRUCTURE