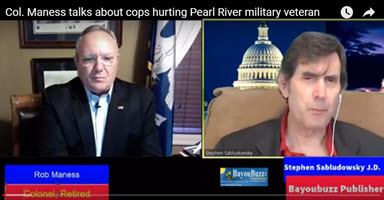 Sometimes, events occur where two people or entities you support, unfortunately, clash.  This situation seems to be the case this morning. Retired Air Force Colonel Rob Maness, during our weekly Facebook Live discussion, talked about a reported incident that occurred last night in Pearl River, in which the conflict appears to be between the Sheriff’s Department and the US military veteran.

Maness described a situation which was reported in the Advocate this morning. Apparantly, as reported, a veteran was having emotional problems which me posted on Faceboo, the police were informed and dispatched and some type of incident occurred leaving the military veteran with lacerations and injuries.

Here is the opening paragraph of the article in The Advocate:

Chris Cambre says he was having a bad day Jan. 21 when he posted on social media that he was struggling. The Army combat veteran suffers from anxiety and depression, and his online post and his failure to answer his phone got someone worried enough to call and ask police to do a welfare check.

But Cambre's bad day was about to turn far worse.

The 48-year-old former military police officer from Pearl River says he was later knocked out, tased, handcuffed and beaten by five St. Tammany Parish Sheriff's Office deputies, an account backed up by a Pearl River police officer who was at the scene.

Maness, who rose to the rank of Colonel is obviously very pro-military, pro-veteran and pro-law enforcement. Here is the video segment and transcript of this part of our Facebook Live event. Here is how he described the conflict:

SABLUDOWSKY:
Before we got started you were telling me about a news story dealing with a military person. Something that you read in The Advocate this morning. What let's just focus on that just for a few minutes

MANESS:
Yes sure.That's right. It just broke last night in the Advocate and came to my attention. There was a veteran over at Pearl River that the headline is was beaten by St. Tammany Parish deputies.
The case has been turned over to the federal authorities by Warren Montgomery, the district attorney for a District 22, which I think is the right thing to do.  He turned it over to federal authorities concerning there may have been a civil rights violation. This individual, this veteran, was being pretty badly, ended up with lacerations on his face, bruises on his body. You can see pictures in the article by Sara Pagonas,of The Advocate. And you know Mr. Cambre, Cambre was his last name.  He was not having a good day.
This is not a you know it's not atypical or untypical of anybody.  But veterans with PTSD, those kind of things, didn't suffer from symptoms and issues, pretty much any time.  He's an army combat veterans so it's pretty apparent that he's suffered from mental health issues and PTSD and those kinds of things so some of his friends got worried about him and asked the police department to do what's called a welfare check on him, which is really stopping by and making sure that the guy is doing OK.

You know we have a big effort in the United States and in the state of Louisiana and in St. Tammany in particular, to try to prevent suicides whereever we can and veterans have a very high suicide rate still over 22 a day from what the Veterans Administration publishes and everything so. You know apparently the police department in Pearl River went out there and they wanted to get the guy to medical attention to a hospital and he did not resist. But he didn't want to go. And so they called the sheriff's department to see if they could get some help. Unfortunately the sheriff showed up--apparently they thought that they needed to use physical force with the gentleman. It doesn't appear that he he tried to use physical force against them. He was tasered, he was beaten with batons, he said he was knocked unconscious.You know, the injuries appear to be pretty well documented in the article.

The danger here is that you know we don't want veterans or anybody, for that matter, to be deterred from reporting when they do have mental health issues or have concerns with their--how they're dealing with their post traumaic stress symptoms and those kind of things. We want them to be able and want them to be encouraged to go seek medical attention and this can definitely deter that it gets out of hand. I hope that vets get back to District Attorney Montgomery very quickly so that we can get the facts and if people need to be held accountable then they are held accountable. This is a terrible way to treat a veteran

Oh absolutely.   I'm shocked, in a state of shock that this happened here in St. Tammany. We don't have these types of issues with our Sheriff's department. So I'm very surprised. I'm very interested to get to the facts. But it sure looks like it, they used too much force. Not saying the force wasn't needed, but it sure looks like they used too much force. So I'm very surprised he has voiced his concerns and we'll just have to wait and see what the investigation turns out.