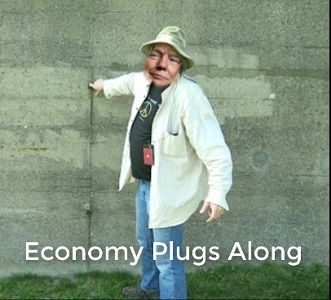 The US economy is booming. Stock market has soared yet, the first six months of 2018, it has sputtered. Oil prices have climbed, yet, the industry has not yet gushed back.  We're in the middle of the second longest economic recovery in history, yet, fears of slow down persists. The US is taking on China and its best allies in the first shots of a trade battle due to tariffs. Economically, all systems are on “go”, full speed ahead, but uncertainty linger.

So, what gives? Has the economy been too good? You know, what goes up, must come down? Or, have deregulation, tax cuts and a bubbling business climate built up such a mighty buffer that any economic leaks due to shifting alliances and trade strategies won't penetrate the optimism?

Dr. Ricchuiti is a business professor, one of the most popular faculty at the business school, a NPR radio personality, a frequent speaker nationally and just all around good guy, with a keen wit. His website says one conference attendee claims, “He’s half Warren Buffett and half Robin Williams.”

Below is part one of the video of the interview and transcript. You'll definitely want to stick around for part two.

SABLUDOWSKY: Let's talk about the US economy since you and I just briefly talked about that in terms of being kind of crazy so what the heck is going on?

RICCHUITI: Well there's a lot of confusion I think a lot of corporations are holding back that money that they just got for the tax cuts because they want to see what's really gonna go on with these tariffs and trade wars.   It's a i've been doing this 40 years i've always been a free markets guy and I think tariffs and trade wars are prosperity killers, and the interesting thing is nobody's more at risk than the state of Louisiana.  We have the-- South Louisiana's than the nation's largest port by tonnage and we're really as vulnerable than anyone else at this point.

RICCHUITI: From well you've an interesting Steve, this has been the second longest economic expansion in history for the US. We've been let's see if you look at it was 90 months of expansion under President Obama, and let's see this 16 under President Trump so altogether a hundred and six months of expansion, without a recession,  recessions two months in a row with negative growth and so the longest is 120 so this is very good but I think a lot of economists are saying that's getting long in the tooth.   One of the things I hear, I talk to corporations through our Burkenroad reports program, I have a radio show on NPR, I talk to business people all the time, the sad-- and one question I asked in every interview is what's keeping you up at night? And it's the same answer for every single one, and that is finding available labor. They think that's the constriction-- we're  below 4%.  5% unemployment is thought to be full employment. So we're at levels we haven't seen in 50 years and  when you when you pack that into the restrictions on immigration you really get yourself restriction on how much further you can go.

SABLUDOWSKY: okay so the economy i,s has been rebounding then under Obama and then Trump--  this big debate going on in terms of who should get credit, my feeling is that they both should get credit but neither one seems you want to give the other credit I mean--

SABLUDOWSKY:so I mean what happened when Trump took over or at least  when he after he won?

RICCHUITI: He had a big run up in the stock market you had a feeling that this was gonna be a pro business administration and and that really cheered investors for that first year after the election the market was up about 23%, and it's starting to cool because what we've seen as we basically had a 1 percent rate of return since the first of the year and that's because these restrictions are starting to to hit businesses, they're starting to see that--now the tax cut definitely was a boost, that's why the market did so well I think is the tax cut to corporations, and  that's sort of baked in the baked in the cake now, and there's some Wall Street's sort of saying what else did we get get for me here--and the odd thing about the tariffs, Steve and the and the potential trade Wars, they seem to be hurting or potentially hurting the states where Trump did best. If you look at obviously Louisiana then you look at people in agriculture, they're they're about to really take quite a quite a hit in here, so that that that seems odd from a political point of view.

SABLUDOWSKY:yeah yeah ok so getting back to Trump and and basically there was a lot of optimism in terms of the tax cut coming and and the deregulation, he started with the deregulation first and then the tax cuts--are the tax cut--to me he also said he wasn't going to allow any of his friends or I guess family to to get the benefit but they they have, am I correct?

RICCHUITI:  I think it's certainly, certainly more involved business-wise than I can ever remember an administration, having their family, family involved in there.  I one other thing that's of course very very important to Louisiana is his oil prices and oil prices have basically went from 114 to twenty-eight dollars a barrel at the worst point and now we're over seventy first of all it's gonna help the state's budget for every dollar the price of oil moves it's a 13 million dollar change to the budget. I was the assistant state treasurer for almost years and so that's a very big deal, but it's kind of curious because the part of the oilfield that's doing very very well and really the only part is these shale fields in West Texas. I brought five of my students there about a few several months ago and it's just booming and they can't find enough people but their break-even there is about $30, $35 a barrel whereas here particularly offshore which is really what what counts in Louisiana, the break-evens are much higher. So one antidotal fees side I'd like to share these people all the time and I'm starting to see more a few more people with hard hats attached to their luggage in the airport which indicates somebody's somebody's going back to work out there, but so far we haven't really seen much improvement and yet the flip side of those higher oil prices, that gasoline prices have gone up about 50 cents in the last in the last year, so in some ways we're getting a little bit of the bad part not not too much of the good part of higher oil prices