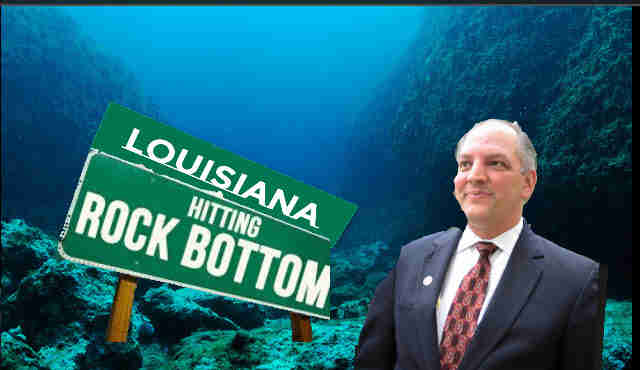 Since Louisiana has just released a large number of prisoners and no longer has the highest incarceration in the nation, it seems more than likely that the crime rate will rise significantly.

Another disincentive for retirees to move to Louisiana is the state’s high sales tax rate. Louisiana has the highest local and state sales tax rate in the nation, even though the rate was reduced in the recent special legislative session. In contrast, Texas has significantly lower sales tax rates and no state income taxes. This beneficial tax environment will certainly lure retirees to their state.

Texas is also a very pro business state and has been successful in poaching businesses from Louisiana for decades. In fact, in recent months, two Louisiana businesses, Smoothie King and Tidewater, announced that they will be moving their headquarters from our state to Texas.

All of these facts should give Louisiana Governor John Bel Edwards an incentive to improve the business climate in Louisiana and engage in serious fiscal reform. Instead, the Governor is content to continue to grow state government, while shrinking the private sector. According to Governing Magazine, Louisiana has the 7th highest number of people per capita employed by state and local government.

Since becoming Governor, Edwards has added over 400,000 people to the Medicaid rolls, which will soon create more budget headaches for a state that is always teetering on the edge of the fiscal cliff. Not surprisingly, efforts in the last legislative session to combat Medicaid fraud were opposed by the Edwards administration.

Clearly, Louisiana state government needs to contract, while the private sector needs a serious expansion. Sadly, just the opposite is happening in a state led by a liberal Democrat Governor.

These sobering statistics should be a wake-up call to the political leadership in Louisiana that the state needs a massive course correction. Instead, the Governor believes the state is on the right track and wants to pursue the typical Louisiana “politics as usual” approach.

While Louisiana and Texas are neighboring states, they are worlds apart, both in business and politics.

Read 2221 times
Tweet
Published in State of Louisiana
Tagged under