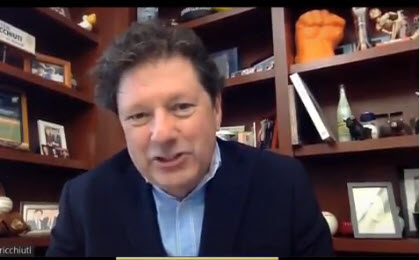 RICCHUITI:  it just seems odd.  The like for instance the auto tariffs that they're talking about, well life is not like it was in the 1970s, that's the way we're seems like we're operating--like no more bmws. No, I don't know how to bring this up to you but they're making South Carolina,  there's uh and then any car that's manufacture here, well the parts are coming in from all over the world. It's not simple anymore.

SABLUDOWSKY: Yeah yeah yeah so we had Jay Laypeyre and we had him on and basically what he said was from his standpoint, it's the uncertainty,  I mean you got a plan in the future you have no idea what's going on, you're not sure if that component part,  that he needs for his machines are going to be available, at all and so it is  which what's freezing his growth

RICCHUITI If that was your situation, you'd be sitting on your hands as well and then you've got this tax cut and you've got all this money and so one of the things that's happened in corporate America is-- , if you get the opportunity, let's say you want to build a new distribution facility in South Florida such, and  that could work out, it might not work out--but if your management and the board, you've got that option versus let's just buy back some of our own stock. We'll increase earnings per share, we'll increase the share price and  frankly, by law their obligation is to shareholders, and so uh it's it's it's tough, it's tough to beat, come like a lead-pipe cinch, like like buying back their own stock.

One of the things, one of the things that's driven the markets so high over the thus-- though twenty years or so, is that in 2000 there was sixty six hundred publicly traded companies in America and now there's thirty three hundred publicly traded companies. And the companies that are they're buying back their stocks, so it is really just supply and demand, you've got more money chasing fewer shares which is right in the the intro part of the economics book. And so it's it's very curious ,because we've had a great great rally,  we're up, we're 300 percent since the spring '09, this has really been the greatest rally in the history of the free world, and really, the reason I'm suspect though is, for the long time of the first eight years of the recovery, investors weren't buying into it and then because they missed tremendous opportunity, but now there's so much enthusiasm for buying stocks and there's such complacency on the part of investors, and and you've got very very low unemployment rates, there's no slack in the economy, usually when everybody's optimistic that's the time to be to be bearish and when everybody's bearish is a good time to to be optimistic.

Warren Buffett famously said --be greedy when others are being are scared and be scared and others are greedy, and so on a market basis, and one of the problems investors have is the stock market is about six to nine months ahead of the economy so a lot of people say all right i'll keep an eye on it when we go into a recession i'll sell my shares, and it's like well actually I'd be too late--and and the other thing that's happening is short-term rates are going up a bit, so sitting in cash not exciting and it's not very lucrative, but you do make something now--before you got 0 so it's becoming an interesting option and

SABLUDOWSKY:  What about the repatriation of all the three trillion dollars--that I mean-- is it coming back do ?

RICCHUITI it is coming back, but what is gonna where is it gonna go? And is it gonna go to where it's been going for eight years, which is stockpiling cash, buying each other and or buying buying shares back--and none of those create jobs, in fact you could argue that M&A  eats up jobs--because when two companies merge, there's  duplicate positions and such so, you need real expansion or real capital expenditures and just, we see more of it but not to the levels where people are talking about with the with the tax cut.   I think it's exactly what Jay Laypere said it's it's uncertainty--it just seems irresponsible or really scary to embark on a big spending program when you just don't know what's around the corner.  It's it's really the same exact example that we had with the the oil industry, you start, go out and spend a billion dollars for a well and four years from now, nobody could tell you where oil prices gonna be. And by the way, back to the oil industry,  one of the things that oh I guess  a lot of people in South in Louisiana and Texas and all  they think, that renewable fuels are kind of like a bunch of hippies in California.  They're not.  It is coming and  1% of the fleet is now electric cars. When it gets to about 2%, it's believed, that's the tipping point and that's when you're gonna really start to see like--  I was giving a speech in Texas uh but a month ago and the guy came up to me afterwards and it goes "yeah I get electric cars where are you gonna fuel, whole food? And of course

RICCHUITI:  yeah, that's that's the way capitalism works--you're gonna get enough electric cars where you're gonna go to bed on Tuesday night with no charges and you gonna wake up Wednesday mornings gonna be one on every street corner, so so it's it's real.  In fact the CEO of Shell came out a couple months ago and he said that demand for oil would start to fall off in about 10 to 12 years, so when you think about what he's saying, they're not the demand for energy which is an imagined where it's going--the part of the pie that's oil is gonna be smaller. And interestingly enough it is it is natural gas that's, gonna natural gas and renewables that are gonna fill that gap, and we are kind of kinda Mecca of natural gas here in Louisiana. And I don't know if you've talked about another shows Steve, but the most amazing thing going on in Louisiana, I think the most amazing thing going on in the country is these LNG facilities that are being built in Lake Charles and Cameron, and this is just incredible.

They have spent 50 billion dollars, building this out. That's the most expensive private project mixture in the country. And they're taking this natural gas which we keep get finding more of us we're drilling for oil, they come on out on these pipelines to Lake Charles--Lake Charles, they take them and freeze them, freeze that natural gas, beyond freezing--and drop it to 265 degrees below zero and it shrinks to one six hundredths of its size.  Load them on these ships and they sent him abroad and it's arbitrage, because gas here we have so much of it we don't know where to put it. Is below $3 a thousand cubic feet but it's $6 in Europe and $10 in Asia. So you can do all that and still make a good profit going it's very very interesting and so those areas of just boom towns now. You could argue that another one of those examples where you get a lot of workers now because they're building it out and then when it's done,  maybe there doesn't require very many people to run that. But that's the most exciting thing going on in energy and it's right here in the state.

More in this category: « Louisiana's John Kennedy at 51%, Bill Cassidy at 48% in new poll of US Senators Bad justice is good reason to hang up the Louisiana death penalty »
back to top