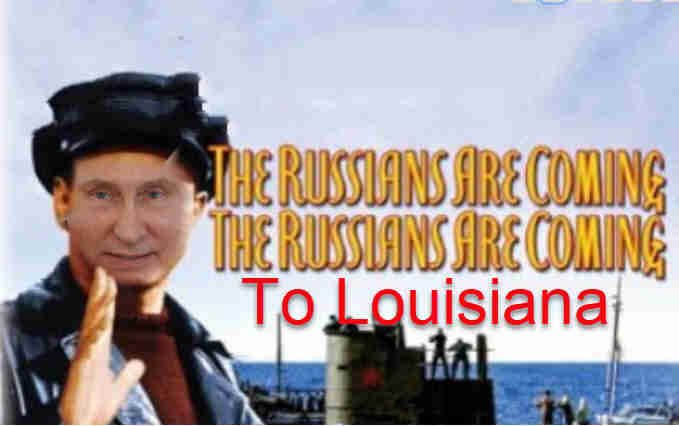 The colonel said that his name was in the Bayou Brief and that later WWL released more information, much more detailed information that—as Maness said, “involves some even bigger names and much bigger names than 'ol Rob Maness as related to Russian oligarchs”

This is a developing story.  Maness said that Vitter, Ruckert and his wife Lynell Ruckert are lobbyists for a company American Ethane who apparently contributed to these campaigns.

The issue reflects the concerns that many have about Russian governmental authorities and President Vladimir Putin intruding into our elections through the cyber world. It also parallels other claims being made of Russian oligarchs secretively making contributions to Republican candidates nationally and GOP-backed, National Rifle Association.

“When conservative Rob Maness ran for U.S. Senate in 2016, Warrior PAC, which was affiliated with members of his campaign, spent $480,000 with Cambridge Analytica to support Maness and to also support fellow Republicans Clay Higgins and Mike Johnson.

Cambridge Analytica is the firm accused of exploiting the personal data of millions of Facebook users in order to target them with disinformation.

“It might be the worst half-million dollars ever spent on a Louisiana campaign,” said John Mathis, Maness’s former campaign manager. Maness, of course, lost his race, but Higgins and Johnson are now both members of Congress.”

Maness said that so far only Republicans have been implicated and feels that the news media and others should investigate Democrats who might have received money from the same source.

Perhaps true. However, ever since the 2016 election, Congress and Robert Mueller have disclosed a lot of Russian money and involvment in our political terrain and for now, overwhelmingly, the Republicans have benefited, one way or another.

During the interview, I mentioned that while Vitter’s and Ruckert’s names are mentioned, based upon the information he provided, as I had not seen either of the articles, just because the former US Senator and his former Chief of Staff Ruckert were named as the lobbyists, does not necessarily mean that they had active knowledge of the transferring of Russian money.  And, like Maness, it surely does not prove that anybody else receiving Russian money funnelled into a US business and agency have any scienter, either.

Obviously, if the facts being alleged are found to be accurate, the revelation, especially if it impacts only or primarily Republicans, could have a significant impact upon the state party and upcoming elections. Indeed, if Democrats are found to be implicated, the impact would surely be reduced.

Maness, despite his being named as one of the recipients said there should be more focus upon this story in the future. He said, “So people should know where their money is coming from that backs, that backs political candidates, that's why we have reporting requirements, so that they know who those candidates are talking to, and friends with, and those kind of things. Because we have a right to know who were voting for and whose support we're voting for”.

Bayoubuzz will report on this developing controversy as more information becomes available.

Just to be clear, Col Maness confirmed it is not illegal to lobby for a foreign firm or country.

Below is the first part of the discussion of the issue. The discussion can be found on the video starting at the 3 minute, 17 second mark and ending at the 8 minute 02 second mark.  While the transcript ends at that point, the conversation continues.

MANESS: There's some bits of breaking news the last few days I just wanted to check to talk about real quick and it has to do with Russia…”

So I know you'll be interested in and Louisiana, I don't normally read the Bayou Brief but but I do get their get their news alerts and those kind of things--especially when my name's in it. They did an article called the Red Pelican a couple of days ago that my name was in.  And then another article just hit this morning and and they're reporting doing back reporting on WWL reporting, that involves some even bigger names and much bigger names than 'ol Rob Maness as related to Russian oligarchs.

So the red pelican article was more about the facebook issues with with the company that the Mercer's up in New York hired, Cambridge Analytica--you're familiar with them.

MANESS: And there you know it was a pretty weak article, they're trying to tie people like me through a super PAC called Warrior PAC to Cambridge Analytica--which Cambridge Analytica was hired by Warrior PAC according to a FEC records, but as you know, candidates can't communicate with SUPER PACS and and don't--so even though I'm being nicknamed Russia Rob by folks like like Indivisible Acadiana on Twitter out there--my security clearance and my long record of loyal service to the country. kind of puts that in my mind to rest. So it's it's kind of funny but but on a serious note, the article today goes ahead and ties makes a bigger tie into a company called American Ethane that is controlled by three Russian oligarchs and to find out and this is based on WWL reporting also, not just the Bayou Brief, which kind of tends to be political on the opposite side of publications like the Hayride and those kind of things, but what impressed me was that there were a lot more facts and it appears that the lobbying firm at the national level that works for American Ethane is headed up by one David Vitter--mm-hmm and another registered lobbyist is the former staffer of David Vitter Kyle Ruckert--who is now, he and his wife Lynnel are are now consultants and lobbyists here at the state level-- and and Lynnel used to be a chief of staff, I believe, for Congressman Steve Scalise. So the story is getting more and more factual in nature and the interesting part about the Bayou Briefs article this morning and again, you have to take it for what it's worth, it's a highly political on the Left blog, but the facts show that based on FEC reporting that this company American Ethane is controlled by Russian oligarchs and is making political donations to candidates, lots of Republicans, lots of folks in the State of Louisiana, like you know the owner one of the Americans as part of this company had a fundraiser for one Jeff Landry, not too long ago, at the most famous home in New Orleans, I believe.  So I would suggest that folks go read that article, check out the WWL reporting-- there.

We've known that there has been some type of connection with the Russians and Louisiana and this article is trying to connect almost everybody in the state on Republican politics side to the Russians.  Of course there is no look at anybody on the left, but but there should be, there should be, and we ought to take a real hard look at it and see what the ties are because, as you know, in politics, money has a lot of power.  In fact the most power that there is in politics is behind the money.

So people should know where their money is coming from that backs, that backs political candidates, that's why we have reporting requirements, so that they know who those candidates are talking to, and friends with, and those kind of things. Because we have a right to know who were voting for and whose support we're voting for.