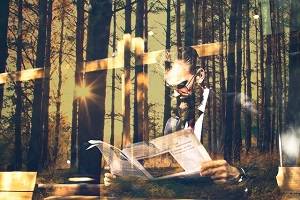 That, coupled with the fact that he was a terrible telephone technician and more than a little put off by real work, prompted him to start looking elsewhere for gainful employment.

It was about that same time that The Ruston Daily Leader was looking for an advertising sales rep. So, with zero experience, the 23-year-old man walked into Publisher Tom Kelly’s office and applied for the position. Kelly, at the time only 36 himself, gave him the job at a whopping $65 per week—a $5 cut from what he was making with what was then Southern Bell.

It didn’t take Kelly long to realize he’d made a grave mistake. It turned out the kid couldn’t sell mittens to an Eskimo. But he had been dabbling with writing a sports column on the side and Kelly spotted something, some quality still unknown to this day, and as a consolation prize, offered him the job of sports editor.

And that’s how my journalism career was launched. A few months later, while I was sitting at my desk, I got a call from then-Louisiana Tech assistant football coach George Doherty. “You want to take a ride with me tonight?” he asked.

And that’s how I came to be sitting in the living room of one Bill Bradshaw when his son Terry signed his grant-in-aid scholarship with Louisiana Tech. I ran a photo of Terry signing his scholarship, beating The Shreveport Times in its own back yard. I wish I still had that photo. He had hair then.

And, of course Doherty was correct. Terry was the first player selected in the 1970 NFL draft and went on to win four Super Bowls as the Pittsburgh Steelers quarterback.

Earlier, in 1968, I left The Daily Leader for a job as news reporter for the Monroe Morning World where I worked for an outstanding editor, the late Jimmy Hatten. It was the same year I married my wonderful and beautiful wife Betty and sitting in the church during the ceremony was Tom Kelly. Hard to believe it’s been half-a-century.

Kelly would soon bring me back as city editor of The Daily Leader and while there, I wrote a short booklet about outlaws Bonnie and Clyde to coincide with the showing of the movie of the same name starring Faye Dunaway and Warren Beatty. It was also during that time that I made the decision to go back to school. I’d flunked out of Tech in 1962. Seems the importance of going to class didn’t really register with me then. But Tom Kelly taught me something that they didn’t teach in Tech’s journalism curriculum and that is, to paraphrase former House Speaker Tim O’Neill, all journalism is local. Tom drilled into my head that there are three critical times in a person’s life that must never be ignored: his birth, his marriage, and his death.

While pursuing a degree in journalism, was recruited by The Shreveport Times to run the north Louisiana bureau for The Times and Morning World in Ruston. Both papers were owned by the Ewing family and were good, solid publications, not the sorry excuses for newspapers they have become under the mismanagement of Gannett. (The Morning World has since consolidated with its afternoon sister publication and taken on its name, The News-Star.)

From there, my journalistic odyssey took me to Baton Rouge to work under the tutelage of Jim Hughes at the State-Times, the now-defunct sister publication of the Morning Advocate.

But Tom Kelly wasn’t quite finished with me yet. In 1976, he brought me back home to work as Managing Editor. I’d barely been there a week when there was an awful pipeline explosion in the Jackson Parish community of Cartwright that killed a retired couple and a mother and three of her children. As I walked up to the crater created by the blast, I could see a group of first responders about 200 yards away frantically waving and shouting to me. The heat from the ground around the massive hole in the ground began melting the rubber soles of my shoes, so I moved away quickly and started walking toward the group of men to learn what they were trying to tell me. And their message was there was another 30-inch gas line right next to the one that exploded. My knees immediately turned to something akin to Jell-O.

There were few rules but some of the most important ones:

At the time, The Daily Leader had an editorial writer, Rudolph Fiehler, PhD, a retired Louisiana Tech English professor.

Doc Fiehler knew nothing about poker, so he remained in the dining room playing bridge with the wimmenfolk. At one point, he got up and wandered into the poker parlor and stood watching us gambling away our life savings in nickel-ante poker.

Tom Kelly, spotting Doc, got up and offered him a seat at the poker table. Doc initially refused, saying he knew nothing about the game.

“We’ll tell you,” the five of us volunteered at once, smelling fresh blood for our game.

Doc did finally consent to sit in for a few hands. He was so foreign to the rules that we had to tell him when he had won.

And we had to tell him that far too often. Before the session was over, he possessed every nickel, dime and quarter at the table. We were busted he was $17.85 richer. One player threatened to ambush him on his way home. I still hold fast to the conviction that we were sandbagged.

As it is with life, we all moved on. I moved back to the Baton Rouge area, settling in nearby Denham Springs and Tom Kelly ended up back in Winn Parish where he had begun. A native of Gaar’s Mill, his first job was with the Winn Parish Enterprise. It was only natural that the yellow dog Democrat (a phrase coined by Harry Truman’s mother, who said she’d vote for a yellow dog before she’d vote Republican) would return to his roots. He founded The Piney Woods Journal in 1997. The monthly publication was geared to, but certainly not restricted to, Louisiana’s timber industry.

Earlier this week, I received an email that Tom sent to his correspondents:

This is to notify you officially that The Piney Woods Journal will cease operations under my ownership with the edition of May, 2019, completing 22 years of continuous publication. As of now, there are no buyer operators waiting in the wings to take over, and unless one steps up in the meantime, we will be closed.

This decision has not been made lightly. The Journal has become a part of the landscape in the region, largely because of your commitment to writing on subject matter that is of particular interest to a readership that has grown and remained loyal from the beginning. However, after several false starts, there appears to be no ready buyer waiting outside our door, and I am not able to do the things that I once did to contribute to the news/editorial/advertising mix that has made The Journal a unique media presence in what many continue to say is a dying industry. I would make a point that if it is dying, it is due to many self-inflicted faults (think Gannett, etc.) by a generation that believes that nothing is real except Google and Facebook.

This month, if I live to see it, I will be 88 years old. I have continuing health issues that prevent me from doing things I used to do on behalf of the paper, and which others are not in a position to do, for various reasons. My wife Miriam is entirely home bound with her own ailments. We have been at this together for thirty-five years. We live with pills and potions by the hour, and spend our most creative energies seeing after ourselves and, of course, our current “family” of growing puppies and their mama.

As the saying goes, it’s been real. And now our participation will end; unless there is a knock on the door down at 104 North Third, the Piney Woods Journal’s residence, with someone bringing a check to purchase our operation, we’ll see y’all in the funny papers.

Good luck, good writing, and good life to all of you.

Needless to say, the announcement was like a punch in the gut. It caught me by surprise and produced an instant wave of nostalgia. The two of us had been through too many battles together and too many battles with each other for his message to be dismissed lightly.

I immediately fired off this message to Tom:

Tom, this truly saddens me on so many levels. Obviously, I share your sentiments about the death throes of news publications and I, too, place much of the blame on the Gannet and Facebook mentality. It’s an industry that I literally grew up in—as a man and as a journalist. But more than that, you and I have a connection that goes back more than 50 years and nothing can ever replace that. You took me under your wing and taught me about journalism. How you managed to have enough patience to do that I will never know, but know this: I will be forever grateful for that education and your tutorship and guidance. You are one of only a handful of people whom I admire and look up to and you will always be an inspiration and a source of encouragement to me. At the risk of sounding too maudlin, your announcement makes me feel as though I’ve lost something very personal—and I have.

This was his response:

My greatest pride in the personal achievements in this profession that we follow are not in the words I write, but in the people I have been fortunate enough to bring in and help to grow as practitioners of our craft. Bill Davis. Eric Mahaffey. Nick Drewry. Jerry Pye. Derwood Brett. Buddy Davis. David Widener. David Specht. Several whose names have slipped my mind. And a brash, talented, industrious achiever of the writing arts named Tom Aswell. We called him Az. If I have left anything behind, it is in the talents of those who carry on even now. They all made me look better that I could have been alone.  Several of a new generation joined up as contributors for this latest enterprise, which has provided me a new level of satisfaction.

What you leave behind, Tom, is a legacy that no journalism class could ever hope to teach. You taught integrity, dedication, and a love for the written word to dozens of fortunate reporters, editors and interns who had the good fortune to walk through the door of the Ruston Daily Leader. I was one of those and I will be forever richer for the experience.

Read 1856 times
Tweet
Published in State of Louisiana
Tagged under