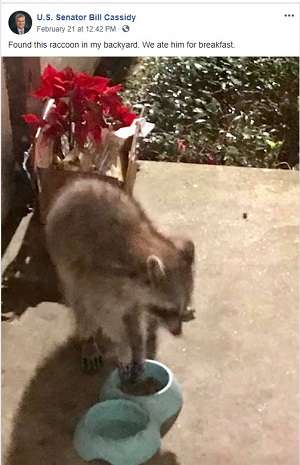 Actually, raccoons and a host of other wild game are a culinary staple where I come from. And I often received a litany of choice critters. As a sole attorney practitioner in Ferriday, I took about any case that walked in the door. Often, my clients were slow-paying or could not pay anything at all. Hunting has always been quite prevalent in northeast Louisiana, and clients would drop off an array of creatures from the wild. I was never short of deer meat, ducks, wild geese, doves, squirrels, frogs, catfish, and yes, raccoons. The assortment of outdoor delicacies seemed endless. And luckily, we had a large freezer in which to pack my culinary acquisitions.

Our home back then was a mile off the highway with access by a dirt road that turned to mud in the winter. Often it was hard to get out of the house, even with my winch-loaded truck. So on rainy weekends, we experimented with creating a variety of recipes using our varied meat collection. A backyard garden added to the flavors, and weekend cookery became a de rigueur ritual. Out of all this gastronomic adventure came my cookbook, Jim Brown’s World-Famous Squirrel Stew and other Country Recipes, available at www.TheLisburnPress.com.

In the rural parishes, you learn to be creative and cook about anything. I gave a speech in Jeanerette one day, and as I headed back home to Ferriday, I stopped at a small country general store for something cold to drink. An older Cajun was on the front poach stirring a large kettle. “Wachau cooking?” I asked.
“Oh, I’m cookin’ up a gumbo,” he replied.
“What kind of gumbo is it?” I pursued.
“I’m cookin’ an owl gumbo.”
Hummm. So, I went on. “What’s an owl gumbo taste like?”
He smiled and said, “About like a hawk gumbo.”

Former Governor Jimmie Davis spent a lot of time at his farm in northeast Louisiana, traveling back and forth to the state capitol. Ferriday was about halfway on his route, and he made it a habit to stop by my law office for a coffee break. I was a wet-behind-the-ears, twenty-six-year-old attorney, and often the only one in the office. So Jimmie Davis would sit a while to rest, talk at length about his life, and give me an early preview of what I would eventually learn about Louisiana politics.

He would often ask me to notarize some document, which I was glad to do. “So what do I owe you, Brother Brown?” he would say. I always settled for a few verses of “Sunshine.” He frequently inquired if I could find him a raccoon. Up in redneck country, we just call it a “coon.” His favorite meal was coon stew. Knowing a request would often come with his visit, I asked some local hunters I represented to drop off a raccoon. I would keep a raccoon or two in the office freezer at the ready for the governor’s stopover.

When I was elected secretary of state some years later, I wrote the cookbook mentioned earlier, and the Governor graciously gave me one of his favorite coon recipes to include in my gourmet collection of sumptuous dishes. Here’s good news for you: that same recipe applies to possum. Now I know you’re glad to hear that. So here is Governor Davis’s favorite dish:

Skin and clean coon. Remove musks that are located under each foreleg and four in the neck. Rub coon with red pepper, sprinkle with salt, add one onion, sliced, and five pods of garlic, minced. Parboil until tender. Place coon in baking dish with three tablespoons of melted oleo and the broth in which the coon was boiled. Place quartered potatoes around the coon and bake at 375 degrees until golden brown.

There you go. You can’t beat that for taste, can you? So all you Facebook berators, quit complaining. Let your taste buds explore a bit. You just might get hooked on racoons and other such Bayou State delicacies.

More in this category: « Louisiana not red-faced over its black-faced frivolities Whole lotta shakin’ goin’ on left for Jerry Lee Lewis of Ferriday Louisiana »
back to top