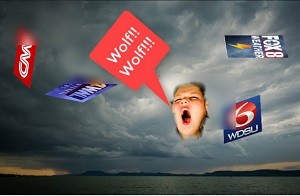 The local television stations decided to devote 24/7 coverage to the storm with breathless reporting of every update from the National Hurricane Center. Reporters were dispatched to areas around New Orleans ready to broadcast stories about rising water and storm damage.

What happened? The biggest excitement occurred when horses and cattle were rescued from flooding that occurred in Plaquemines Parish. Overall, CNN meteorologist Dave Hennen stated the obvious when he concluded that Hurricane Barry was “a bit of an under-performer.” The winds were not as fierce as advertised, the rainfall was much less than what was forecast, and the storm surge did not meet expectations.

Nevertheless, as a result of the hype, some people evacuated, while many others became very concerned about this supposedly deadly storm. Soon, store shelves were empty and gas stations were sold out. In the end, all the aggravation and worries were unnecessary as New Orleans received very little rain and wind with no flooding or significant damage.

For New Orleans natives, Hurricane Barry should have been a non-event. Over the years, we have regularly experienced much more severe storms. Dealing with the hurricanes is a necessary part of living in this region of the country. We should be very accustomed to these storms and how to deal with them in a calm and sensible manner.

Of course, people living south of New Orleans in areas not protected by levees needed to seriously consider evacuating. There are other people who are especially vulnerable due to poor health or other reasons who cannot risk staying home for any storm in which electrical power may be lost for an extended period.

Unfortunately, dealing with a minor weather threat in a realistic manner is impossible with the over caffeinated media coverage devoted to any potential hurricane. The problem is at both the local and national levels.

In potential weather emergencies or other disasters, people want to watch TV to stay informed. Surely, in New Orleans, this storm was the first time in years many area residents watched local news. While the coverage is an important service to the public, it is also driven by a desire to capture ratings and advertising dollars as many more people are watching than normal.

Turning on the television for storm coverage is a New Orleans ritual. Over the last few decades our community was blessed to have great meteorologists, like Nash Roberts and Bob Breck, who spent their long careers on television presenting hurricane information in a calm and professional manner. They did not have any fancy computer graphics or an overabundance of charts and statistics. In fact, Nash Roberts did his job very well with only a grease pencil and a map.

Unfortunately, with the advent of cable news and additional media outlets, the impact on hurricane coverage has been more hype, not more solid information. Let’s hope the next time a storm is headed our way; people will make wise decisions for their families. The problem is that their experience with Hurricane Barry coverage may delude people into thinking that the next potentially dangerous storm is just the media overreacting once again.

So, when a real killer storm is headed our way, it may not generate a quick response as New Orleans area residents may view it as more sensational coverage. This is the potentially catastrophic result that may occur because our media constantly cries “wolf.”

More in this category: « Way too much Political Correctness in US and Louisiana Louisiana has the "hots" for Tobasco Sauce »
back to top