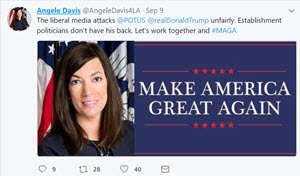 The speaker in the Angele advertisement is an African American male with a thick-southern black voice using the colloquial words, “she be” instead of the clearly grammatically correct “she would be”. I assume the intention is to make some of the listeners feel comfortable.

Might the campaign ad be hiding her prior political promotions and campaign appearances where she clearly wants to grab the Trump vote, who is wildly popular here in Louisiana, but not so much in the African American community, especially New Orleans.  Here is the text from the promo:

Don't be fooled by Republican Neil Riser on those ballots.  There are more qualified candidates for state treasurer. There's Derrick Edwards the only Democrat in the race. If elected, he be the first African American statewide elected official in modern Louisiana history. He's earned both a master's degree in accounting from Tulane and a law degree from Loyola. And, there's Republican Angele Davis. She'd be the only woman statewide elected official. She'd balance the budget, increase our credit rating and cut taxes. The choices are clear.  Get out and vote this Saturday. Paid for by Angele Davis for Treasurer.

Well, the election is between three Republican candidates vying for the runoff spot and Derrick Edwards, an African American. Polls have indicated that the little-known Edwards has a strong shot to make the runoffs, leaving Angele Davis, Neil Riser and John Schroder to fight it out for the remaining runoff spot.

Riser has been trying to attract the black community leaders and to get his name on the ballots of their political organizations.

Which explains why one listening to the ad and not knowing her apparent “devotion” to Trump might be puzzled at first, thinking it was paid for by the Edwards’s campaign. Technically, it was not. It was Angele Davis trying to peel those potential black voters from Riser, hoping they go to either Edwards or to her.

Targeted ads to racial groups is not anything new as all candidates play the race card one way or another at some point in time or another.

Still, this one, in my view, is blatantly cynical, given her efforts to morph her into Trump throughout the state and given her focus upon raising the profile and voter turnout for her Democratic opponent during a hot New Orleans election season involving a contest for New Orleans Mayor, City Council and other seats.

Oh, but if you don’t turn the ballot switch for Edwards, you can always vote from Davis.

After all, Trump is technically not on the ballot.