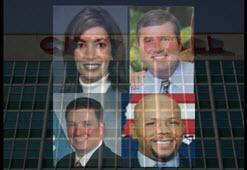 by Lou Gehrig Burnett, Publisher of Fax-Net
Runoff for State Treasurer
As expected, the lone Democrat in the race for State Treasurer – Derrick Edwards – finished first in the field of six candidates.  He garnered 31% of the vote in the primary on Saturday.

Among the remaining candidates – four Republicans and one Libertarian – former state Rep. John Schroder squeaked into the runoff with Edwards, getting 24% of the vote.

Schroder edged past fellow Republicans Angele Davis, who had 22%, and state Sen. Neil Riser, who had 18% of the vote. The remaining candidates Republican Terry Hughes had 3% and Libertarian Joseph D. Little had 2%.
And as expected, the voter turnout was dismal with only 13.5% going to the polls.
Political pundits are not giving Edwards much  of a chance in the runoff against Schroder.  While Edwards captured 31% of the vote in the primary, GOP candidates came in with 66%.
Edwards, who is black, suffered a catastrophic football injury in 1989 in his senior year of high school which left him paralyzed.  He went on to receive three degrees in college and is a practicing attorney in Baton Rouge
Schroder, who is white, is a veteran, former law enforcement officer, small businessman and legislator.  He resigned his state representative seat in St. Tammany Parish to run for state treasurer.
Money matters.  As of September 24, Schroder had spent a whopping $820,880 on the race, more than doubling what his two main Republican opponents spent.