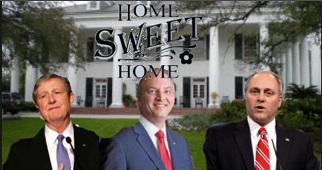 As of now, what is the shape of the Louisiana political waterfront?

This was the gist of  a series of questions I asked political analyst and pollster Bernie Pinsonat during a Facebook and Twitter live video conference we held on Wednesday.

Pinsonat  noted that obviously the big and most immediate issue is the fiscal cliff budget hole that the state is once again is facing with all the politics associated with that controversy. Nationally, Louisiana does not have any major elections. Both US Senate seats are unavailable until at least 2020.  Bill Cassidy and John Kennedy are recent victors with Cassidy winning his six year term in late 2014 and with Kennedy beating the field in fall of 2016.

Also, the pollster believes that none of the US Congressmen appear to be in any risk of losing their respective seats, should they decide to run. Thus, along with the legislative elections, the Louisiana governor’s race is the top entry for Louisiana politics. The Louisiana legislative and gubernatorial elections will take place in fall 2019.

Pinsonat had published a poll in December which determined the "state of the state" and the popularity of the major statewide officials.  He said the key story was the “numbers behind the numbers”.  As might be expected, the results showed that Louisiana is divided by political party sympathies and party-line politics, whether it be the direction of the state and country, healthcare, government spending or  the penny sales tax which expires this year.

Pinsonat noted that Democratic Governor John Bel Edwards has a roughly 15-point advantage over former state treasurer in terms of popularity of each elected official and has a roughly 16 point lead over  Republican US. Senator Bill Cassidy.  White Louisiana voters , in particular, bring down the Republican US Senators’ favorables.

So, with such a significant favorable advantage, does Pinsonat believe that Edwards might be a shoe-in to win re-election?  Absolutely not.  Pinsonat notes that the Republican Party is flush with money and if they want to win this seat, they could unleash mountains of millions just like they did to win the recent House of Representatives race in Georgia.  The pollster said that the GOP spent over 50 million dollars to win that election.

While Edwards would not be a lock to beat John Kennedy and while in a one-on-one contest, Edwards could be the underdog, however, that does not mean Kennedy would defeat the Louisiana governor, a Democrat.

Another formidable foe, should he decide to run would be Steve Scalise, the Republican House Whip Congressman from the 1st Congressional District.  While nobody is pumping any money into ads to take on Edwards, Pinsonat believes that ads linking Edwards to "Chuck and Nancy" could be powerful just like Obama adversely helped Cassidy defeat Mary Landrieu and helped David Vitter cream Charlie Melancon in 2010.

Then there is the question--would the Democrats pump any money at all into the Louisiana gubernatorial race? After all, they stayed home with their money when Cassidy beat Mary Landrieu in 2014.

Will we see any candidates entering the ring this spring or summer?  Pinsonat believes there are three considerations as to when the announcements might take place. First, the question might dependable upon whether the Democrats retake the House or the Senate.  While Kennedy and Scalise are getting tremendous amount of exposure and power nationally, that could change should the Democrats unseat the Republicans in either or both bodies.  If that were to occur, either men might prefer to come back home rather than be in the minority.

Right now, Kennedy, who is a statewide elected official pretty much is freezing the market.  No candidate for Governor will announce until Kennedy decides what he might want to do. Should he decide not to run and assuming Scalise likewise opts out, then we could see the candidates for Louisiana Governor publicly announce.

More in this category: « Pinsonat: For Louisiana voters, Trump or Chuck and Nancy? John Bel Edwards reports over $5M on hand for Louisiana Governor's race run »
back to top