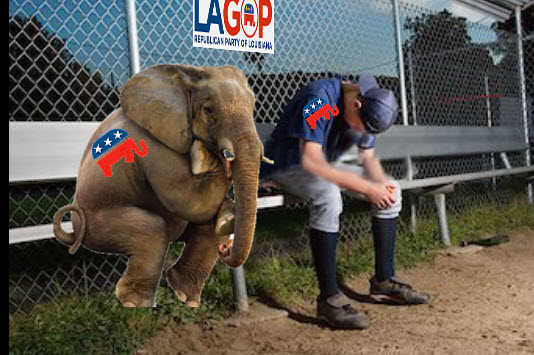 As we enter December 2018, in the land of Louisiana politics, there are two certainties:

No. 1: US Senator John Kennedy is not running for Louisiana governor.

No. 2: The Democratic Party seems as if they could not be happier, for now.  The GOP bench of gubernatorial hopefuls is woefully thin.

In fact, made thinner with the sudden and surprising decision by Kennedy to throw in the election towel and stay up in DC to swing at the CNN, Fox News and MSNBC fences for quips and quotes.

Now that Kennedy is not on deck, nor is Republican Steve Scalise, the other Louisiana folk hero living partly in the Beltway, now that Attorney General Jeff Landry has said he was not in the run, who's left?

Which is the point the Louisiana Democratic Party appears to be playing, loud and clear.

Nobody. No heavy hitters, at least.

Today, the Louisiana Democratic Party sent out an email stating that Kennedy himself, only recently told a reporter that only two people who could win against John Bel Edwards--he and Steve Scalise.  The obvious implication? Well, scratch Kennedy and Scalise, leaves, who?  Or, is it "whom on first"? ,

According to a recent Bernie Pinsonat poll, Kennedy was right. He could beat the current mansion holder, Edwards and was four points ahead in Pinsonat's survey released last week..

Thus, the giddiness from the boys in blue up in Baton Rouge and the likely purpose of their email.

Below is the press statement from the Democratic Party, which wants us to know that Edwards has a big lead and only the bat boy heading to the plate.. Also below is the transcription of the first part of the Kennedy interview, in which he distinguishes his political philosophy from that of Governor Edwards. (Part 2 of the interview tomorrow)

In raw video recorded on November 16 and unearthed today by Victory 2019, Senator Kennedy makes clear what he said repeatedly behind-the-scenes before deciding not to challenge Governor Edwards: none of the candidates now considering a run for governor can beat Governor Edwards.

In the video clip, Kennedy says “there are two people that can beat John Bel Edwards, according to the polling. I’m one and Steve Scalise is the other.”

The clip is from the uncut video of a 7-minute sit-down Sen. Kennedy had with Gray DC’s Alana Austin that until now was buried in a side-menu on a Kennedy story that was published by KALB on November 16.

Senator Kennedy ruled out a gubernatorial campaign on December 3, and Rep. Scalise has said firmly and frequently he is not interested in running for Governor in 2019.

“Senator Kennedy said repeatedly while considering a run for Governor that there were only two people he believed could beat Governor Edwards in 2019; himself and Representative Steve Scalise. Now neither Sen. Kennedy nor Rep. Scalise are running. As the Louisiana Republican Party scrambles to find a standard-bearer, their candidates will have to explain why Louisiana’s most visible statewide elected Republican—who most of the party apparatus was lining up to support for Governor—thinks they’ve got a snowball’s chance in hell.

“While Senator Kennedy will likely flip-flop and try to pretend he never said it or didn’t mean it, supporters of Governor Edwards now have hard proof: video of Senator Kennedy throwing a wet blanket over the entire 2019 Republican field. As they try to raise money and establish themselves as contenders, their candidates will not be able to run and hide from this stark video,” said Eric Holl, communications director for Victory 2019, the Democratic Coordinated Campaign in Louisiana.

Thus far, none of the Republicans considering running for governor have addressed Senator Kennedy’s prediction that they are sure to lose.

PART I OF THE TRANSCRIBED INTERVIEW WITH JOHN KENNEDY

AUSTIN: In Louisiana, I know you've been a vocal critic of many of Governor John bel Edwards policies-- why do you think a Republican would be better for Louisiana in the governor's mansion? We

KENNEDY: Well I don't think necessarily a Republican or a Democrat I think in terms of people. and I consider governor Edwards to be a friend. I also consider the fact that he's taking Louisiana in the wrong direction in my judgment. John bel and I just have a fundamental disagreement about government. I believe in more freedom, he believes in more free stuff. and he moves your tax dollars to pay for it.

I think the problem, the main problem in Louisiana is that we spend too much. our budget keeps going up and up and up and we haven't added people. in fact we're losing people. if we keep losing bright young people in our state to Denver and Dallas and Atlanta the average age in Louisiana is going to be deceased.

I think we spend too much. now governor Edwards thinks I think we tax too little. and he believes, I believe government exists to to enhance people's lives, to allow us to do - to exercise our own, our own free will that God gave us. John bel thinks that we should just turn in our decisions over the government and government knows best and I just don't agree with it.

I haven't decided to run for governor. I'm not trying to be coy, I'm saying the same thing I said two or three months ago I'll make a decision in the next couple of weeks. I've polled the race carefully, I've seen other polls. if I run I went there to people that can beat John Bel Edwards according to the polling I'm one in Steve Scalise and the other. and I think John bel knows that. you notice he hadn't released his polls. but that doesn't mean I'm gonna run. it's not just about winning. I enjoy being a United States Senator. I passed seven bills I've been co-sponsor 18 others. I've got a lot of other ones in the middle of passage and it's gonna be a hard decision, I'll try to make the right decision for my state and my country and me and my family.

KENNEDY: What are the factors for you and you know

KENNEDY: It's it's it's I mean that's a fair question but  it's not really a formula, you know, you can't for me, you can't sit down with a yellow legal pad and in one column and put the advantages and another column the disadvantages-- it's just something you've got to feel. I like, I like government. I like policy. I wouldn't do this if I didn't. I've never tried to pretend to be one of those politicians that oh it's a huge sacrifice and I'm you know making--I'm not-- you know I'm doing this because I love it.

But but but it does take a big heart and a lot of wind and the thick skin-- both being US Senator and being a governor, and it's just you just kind of sit you have to sit down and trust your your gut and your conscience

More in this category: « Louisiana US Senator John Kennedy won't run for governor, now who? Eddie Rispone's ready for Governor, are Louisiana voters? »
back to top