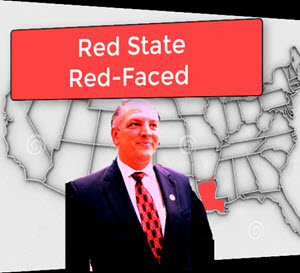 In his video, Edwards outlined his so-called accomplishments, but neglected to remind voters that he is a Democrat. Ironically, he is trying to have it both ways, pursuing liberal policies while masquerading as a conservative.

His upcoming agenda includes increasing teacher salaries and raising the minimum wage. While teachers certainly deserve fair salaries, raising the minimum wage has been shown to have negative effects on the workforce. For example, when Seattle voted to increase the minimum wage to $15 per hour, a study by the University of Washington found that it negatively impacted low wage workers, who made $125 less per month. Thus, Edwards may be promoting a plan that will actually hurt the working class in Louisiana.

The Governor is proud that he expanded Medicaid, although the impact on Louisiana taxpayers was significant. According to the Legislative Auditor, at least $85 million was wasted on residents who did not qualify for the benefits.

In his video, Edwards touts the state’s fiscal stability, but it was achieved at a tremendous cost. As noted by U.S. Congressman Ralph Abraham (R-LA), one of the declared GOP gubernatorial candidates, under Edwards, “Louisiana has seen the largest tax increase in state history.” Due to the increase in state sales taxes, Louisiana now has the unfortunate distinction of having the second highest rate in the nation. This high tax rate will not lure people and businesses to Louisiana.

While the Governor promotes that some major businesses have opened in Louisiana during his term, many more have left. Louisiana is one of only eight states in the nation to suffer a loss of population in the last year. If the business climate was better, Louisiana would have more opportunities for citizens in remain in the state. Unfortunately, Edwards is not a pro-business governor. He is pro-government. Thus, it should surprise no one that in the last labor report, the unemployment rate in Louisiana was 4.9%, much higher than the national rate of only 3.9%.

According to Abraham, “Louisiana has…failing grades for fiscal policy, and one of the weakest economies in the US under John Bel Edwards’ watch. If he's bragging about those as first term achievements, I'd hate to see what the next four years would look like. Louisiana is clearly on the wrong path, and the only way to correct it is with a new governor.”

The Congressman is surely correct. In 2019, Louisiana voters will be electing all members of the legislature and all statewide elected officials. While the GOP wants to retain the majority in the legislature and hold on to the statewide positions, the number one priority needs to be the defeat of John Bel Edwards.

This will not be easy for Edwards is a shrewd politician. Yesterday, he jumped on the Saints bandwagon and sent a letter to NFL Commissioner Roger Goodell complaining about the horrible no-call in the NFC Championship game. This will be a popular move, but voters need to look past his grandstanding and examine his real record.

In 2015, Edwards ran as a conservative Democrat, pro-life, pro-gun and pro-military. He neglected to tell voters he believed in big government and higher taxes. His priorities have included expanding Medicaid and releasing criminals from state prisons.

Voters will have to sift through his campaign rhetoric to determine the truth. It will be incumbent on the Republicans in this race to give voters the information they need to make the right decision.

Louisiana is a red state and should have a Republican Governor. We have an opportunity to make that happen this year. Let’s not squander it.

More in this category: « So, it's official, John Bel Edwards enters Louisiana Governor's race Louisiana voters on chronic "non calls" »
back to top