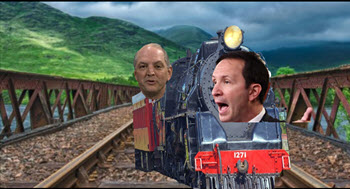 One of Edwards’ crowning achievements was to expand Medicaid for the State of Louisiana.

On my first day in office, I expanded Medicaid to provide health care to Louisiana’s working poor. We’ve saved the state hundreds of millions of dollars, created 19,000 jobs, and cut Louisiana’s uninsured rate in half. But most importantly, Medicaid Expansion is saving lives.

Today, the Republican Attorney's General Association sent out this email blast to announce the legislation now going to the Governor’s desk:

Louisiana Attorney General Jeff Landry made news earlier this month when his "Health Care Coverage for Louisiana Families Protection Act," a state-based, Constitutionally-sound solution to protect pre-existing healthcare conditions, passed the Louisiana Senate unanimously. Last night, the Louisiana House of Representatives, in a strongly bipartisan fashion, passed the bill, which will lower health insurance costs for all Louisiana citizens. The vote was 90-9.

Attorney General Landry and numerous stakeholders, including the Louisiana Insurance Commissioner and Louisiana House Speaker, authored this plan in response to the Affordable Care Act, or Obamacare, being ruled unconstitutional by a Federal District Court in Texas.

Attorney General Landry's plan, unlike Obamacare, works within the confines of the rule of law and Constitution, but similar to Obamacare, guarantees coverage for people with pre-existing conditions, through the establishment of a GUARANTEED BENEFITS POOL. Similar high-risk pools have been hailed as successful in other states, such as Maine, and have been praised by the Wall Street Journal and prominent think tanks for stabilizing the health insurance marketplace and reducing costs for all consumers.

The "Health Care Coverage for Louisiana Families Protection Act" will now be considered by one of the nation’s most unpopular Governors, Democrat John Bel Edwards, who is up for re-election in the red state this fall.

Once the "Health Care Coverage for Louisiana Families Protection Act" becomes law, Louisiana will become the first state in the nation to successfully replace Obamacare with a state-based alternative, thanks to Attorney General Jeff Landry's leadership.

Indeed, the governor will have one whopper of a decision to make--unless he has already done so. The House 90 to 9 vote puts pressure on the governor to sign the legislation. But in doing so, he gives his numero uno nemesis Jeff Landry some huge crowing rights.

The Republican Attorney's General Association’s letter appears to be over-enthusiastic in assessing Edwards’ popularity, or lackthereof. According to the survey published by the respected Morning Consult, Edwards ranks 25th in the nation, far from one of the nation’s most unpopular governor’s.

Yet many making up Edwards’s base is not very happy with him today as the session comes to a close and as he begins to rev up his re-election run for a fall 2019 vote. He signed into law one of the most severe anti-abortion bills. Interestingly, in response to his tweet were not comments about health care but urgent and angry demands that he respect women’s right to choose.

That base base might become that much more displeased should Hollywood do onto Louisiana as it has threatened to do onto Georgia. Major Hollywood brands are demanding the Georgia governor reverse that anti-abortion law that also recently passed. Louisiana’s film industry is now just getting back on its feet after seeing a substantial loss of business to Georgia after the Louisiana legislature tinkered with the movie tax credits a few years ago.

Also, Edwards’s decision is one of national importance. The national Democratic Party is strongly in favor of maintaining the Affordable Care Act and sees the healthcare debate one of their major strengths against the Republicans and President Donald Trump.  Actually, as of now, it personifies the party of which the leading presidential candidate is Obama's "partner in crime" Vice President Joe Biden. Adding a little tension into the decision-making process, the only Democratic Louisiana Congressman Cedric Richmond has become the co-chair of Biden's national ticket.  He and Edwards are the only Democrats in Congress and in statewide government positions.

Signing the bill means he closes the door on one of his proudest moments, Medicaid Expansion. It also gives Landry some huge bragging rights in his ongoing battle with the governor. Edwards certainly needs the national democratic party’s assistance in the upcoming election who obviously will not be too thrilled with a governor who has cratered on both choice and Obamacare.  The last thing the dems want is to give President Trump a victory on healthcare.

On my first day in office, I expanded Medicaid to provide health care to Louisiana’s working poor. We’ve saved the state hundreds of millions of dollars, created 19,000 jobs, and cut Louisiana’s uninsured rate in half. But most importantly, Medicaid Expansion is saving lives. pic.twitter.com/3V6NuwQzkx

Edwards does have some breathing room. The legislature has given him the green light to jump onboard the Landry healthcare train.

The legislative session ends by 6PM June 6th. It won’t be long until we see just how the Louisiana governor, up for re-election, engineers through this dark and tight tunnel.

More in this category: « Louisiana GOP hopes to rebound with Edwards-LSU basketball queries Before Donald Trump, there was Louisiana's Kingfish, Huey Long »
back to top