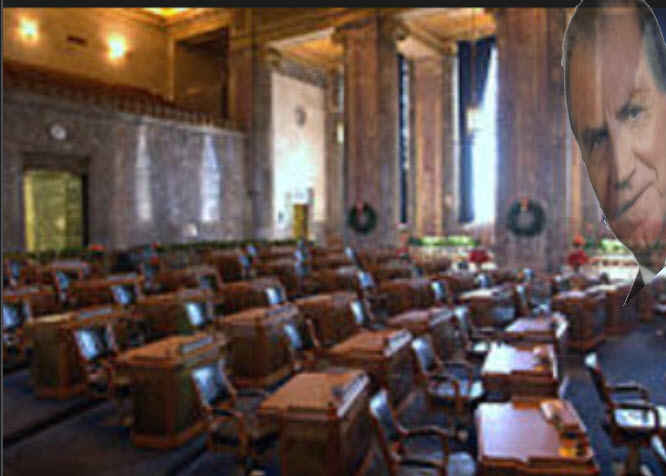 For starts, here are items hitting the Bayoubuzz email box over the past two days. To get the conversation going. perhaps the ultimate question to ask right now is, which party is best suited to take home the marbles this fall, Democrats or Republicans? Pollster John Couvillon shares his views in a post from his website.

One of those people seeking a legislatie seat hails from House Seat 79th in Jefferson Parish. Attorney and civic activist, Debra Villio, seeks a seat in the Louisiana House of Representatives.

Now, this is one of the issues that we might not hear much about this upcoming election--global warming. A candidate for Statewide seat wants to know, why not?

Last, one of the familiar faces in the Louisiana legislature has passed onto the greener pastures. Doc Hines, for Senate President, has died. Current Senate President, John Alario, who served with Hines, shared his thoughts via email on Wednesday:

REPUBLICAN VS. DEMOCRAT LEGISLATURE--RED OR BLUE 2019?

Louisiana is one of three states (Mississippi and Kentucky are the others) who have statewide elections this year. And while the Governor’s race will certainly be competitive (as evidenced by this recent JMC poll), races for the state legislature are a similarly important part of the political landscape.
Historically, Democratic dominance in Louisiana was exemplified by near unanimous representation in both legislative chambers. Part of their dominance, however, was due to Republicans’ only competing for a fraction of the seats – in 1991, they only contested 43% of legislative seats, and even then, they only won 35% of the seats they DID contest. That meant that Republicans only won 15% of legislative seats in 1991, and the partisan vote for House and Senate seats in the October 1991 primary was 75-23% for Democratic candidates.
That began to change in 1995: in addition to winning the Governorship, Republicans made a concerted effort to add to their membership in the Legislature, and met with some success. Still, in the October 1995 primary, the vote for legislative candidates was 68-30% for Democratic candidates.
The 1995 election cycle was an political inflection point for another reason: Louisiana voters overwhelmingly approved a term limits amendment to the Constitution that limited legislators to 12 years’ service in each chamber starting with the 1995 election. So for those elected on or before the 1995 election, their tenure in that chamber would come to an end in 2007. However, since the limitation was for each chamber (as opposed to overall tenure), what happened was that a substantial number of term limited House members ran for the Senate in 2007.
Nevertheless, 2007 was a watershed year for Republicans because term limits immediately opened up the playing field in politically favorable areas, and not only did Republicans for the first time ever come to a near parity in both chambers, but the legislative partisan vote was a relatively narrower 55-43% Democratic. Republicans eventually (through both party switches after the 2010 election cycle and special election victories) gained numerical control of both chambers by 2011, and by the 2015 election cycle, the partisan legislative vote was 56-41% Republican. Going into the 2019 elections, the current partisan balance is 25-14 Republican in the Senate and 62-39 Republican (with 4 Independents) in the House.
What makes 2019 a significant election cycle is that the large freshman class elected in 2007 is now term limited. More specifically, 16 Senators (out of 39) and 31 Representatives (out of 105) are leaving their respective chambers. And if you also count (1) non term-limited House members running for the Senate, and (2) two known retirements (Democrat Terry Landry and Independent Terry Brown), there will actually be at least 40 new House members (there are no known Senate retirements at this time).
So what is likely to happen this year ? In the Senate, there are 16 term limited seats. While 12 of those are Republican held, they are generally in conservative areas: the aggregate vote in these 12 seats was 72-25% Trump and 56-44% for Vitter (in other words, a noticeably more conservative constituency). And if we limit our analysis of “gettable” seats to the ones being vacated, you have exactly one “gettable” seat for Republicans: the senate seat based in Avoyelles and Evangeline Parishes held by Eric Lafleur (D-Ville Platte), which voted 70-27% for Trump and 56-44% for John Bel Edwards.
There are more pickup opportunities for Republicans in the House. 31 of its seats are term limited, while another nine non term limited representatives are either retiring or running for the Senate. This group of 40 representatives consists of 21 Republicans, 17 Democrats, and 2 Independents, and it’s the political complexion of some of the 17 Democratic held seats (as well as the two vacated Independent held seats) that benefits House Republicans (the Republican held seats voted 73-23% for Trump and 58-42% for Vitter). While 11 of the 17 Democratic held seats are in solidly Democratic constituencies that gave Hillary Clinton 76% and John Bel Edwards 84% of the vote, the remaining eight Democratic/Independent seats are pickup possibilities for the Republicans, as they collectively voted 74-25% for Donald Trump and 50.2% for David Vitter.
In conclusion, the political complexion of the legislative districts impacted by term limits (especially in the House) benefits Republicans, but candidate quality and adequate funding will also play a major role in determining which candidates are/are not viable.

Marguerite "Margee" Green, a candidate for Commissioner of Agriculture and Forestry, seeks global warming an important, yet "hot" topic.  In an email blast, Green claims that research continues to show the devastating effects that Climate Change will have on all of Louisiana, yet, lawmakers remain quiet about the issue.

In many quarters, in the deep-red, petroleum-based state, talking climate change or global warming might be a challenge. Many local politicians take to it unkindly and like President Donald Trump, feel great comfort in calling it a man-made hoax. Not Green. Her email states:

"I'm confused about why we're not taking aggressive action in Louisiana, where we will feel the effects of Climate Change sooner than most other parts of the country. I'm especially baffled about why we aren't talking about the effect on Agriculture."

The Environmental Protection Agency reports that heat waves, which are projected to increase under climate change, could directly threaten livestock.

"In 2011, exposure to high-temperature events caused over $1 billion in heat-related losses to agricultural producers."

Concerning crop production, the agency cites that while increased Carbon Dioxide can stimulate plant growth, it inevitably decreases the nutritional value and concentrations of protein and essential minerals in most plant species, including wheat, soybeans, and rice. The department points out that this effect represents a potential threat to human health.

This Sunday, June 23rd, at 12:30 pm in Baton Rouge, Green will gather volunteers to collect nominating petition signatures for her candidacy. She is running on a platform of food production, addressing climate change and introduction and regulation of recreational cannabis.

"We don't have another four years for our elected officials to pretend like this isn't happening. We're passed that. It's time to fight back against climate change and protect our citizens, farmers and food supply." said Green.

“We are deeply saddened to learn of the passing of our friend and colleague, Doc Hines. During his tenure in the Senate, Doc worked tirelessly for the people of Louisiana and was an inspiration to those of us who served with him,” said State Senate President John A. Alario, Jr.

Over the course of his 15-year service in the Senate, Hines gained the respect of his colleagues regarding medical and health care issues. He served as the chairman of the Senate Committee on Health and Welfare and conceptualized the Gene Therapy Research Institute. He also chaired the task force that created the Children’s Health Insurance Program (LaCHIP), which has provided health care for hundreds of thousands of children since its inception, and authored the bill creating the SeniorRx Program, which has served over 150,000 senior clients.

“He was a champion for the citizens of Louisiana, especially those who needed him the most – children, the elderly, and those living in underserved rural areas,” said President Alario. “His dedication both as a legislator and a physician made Louisiana a better place. Our thoughts and prayers go out to his family and the Senate shares their loss.”

Prior to his service in the legislature, Hines received his undergraduate degree from the University of Southwestern Louisiana in Lafayette, his Doctor of Medicine Degree from Louisiana State University School of Medicine in New Orleans, and the rank of flight surgeon and medical officer at the School of Aviation Medicine. He served at the Naval Auxiliary Air Station in New Iberia and thereafter returned to his hometown of Bunkie to open his family medical practice.

More in this category: « Louisiana elections near as poor rankings seem to last LAGOP e-missive to Louisiana voters: Louisiana jobs and growth in tubes »
back to top