If first impressions matter, putting political leanings aside, the one thing I learned about Republican candidate for Louisiana governor, Eddie Rispone, is that he is a businessman, a conservative and an outsider.  And, judging by his image at the top of the page, he’s a fierce archery advocate ( Is that called an Archer?).

Digging a little deeper is a full biography. But before getting to the real history and remarkable achievements, I first plowed through the top two paragraphs:

Edward Rispone, is a lifelong Louisianan, avid outdoorsman, and Christian conservative candidate for Governor. Eddie loves Louisiana. Guided by his faith, family, and the blessing of God in his life, Eddie feels called to give back to the state that has given so much to him. Eddie is not a career politician. Eddie is a successful entrepreneur, business executive, and conservative outsider who has the experience and expertise to move our state forward.

Eddie grew up in a blue collar family of nine in North Baton Rouge. Early on, Eddie learned about faith, family, and personal responsibility. Eddie was raised with a strong work ethic and solid family values—he is pro-life, pro-family, and pro-Second Amendment. He knew that anything he wanted in life would only be achieved through hard work. Eddie began working construction with his older brother Sammy at age 15, a passion that would stay with him for decades.

Visiting his “in the news” page, there is one thing for certain, he supports President Donald Trump. Three of the  top three articles in this section  refer to his TV commercials and his devotion to Trump. Of course, if you’ve been a TV lately, you would know that.

Abraham’s website is slightly different but there is no doubt, he wants to impress upon the voters that he is archetypical Louisiana.  The first impression is important.  In the image at the top of the home page, Abraham stands on the floor of an arena with a large crowd behind him. Overlaying that image displays his own impressive background:

Dr. Ralph Abraham (or "Doc") is running for governor because he knows that hardworking Louisianians deserve better. Doc is a lifelong Louisianian - he's a farmer, a veterinarian, a doctor, a soldier and since 2014 he's been a leading conservative Christian voice as our Louisiana congressman. As governor, he'll unleash Louisiana's full potential and create a state that thrives for generations to come. With Doc leading the way, Louisiana families will see a stronger economy, more opportunities, and a better quality of life. Not only do we need Dr. Ralph Abraham, but we need you, too. Join the team today!

Scrolling down the page, is a video commercial that asks, “Who is Ralph Abraham?”. The first description is, he is a Christian, followed by a family man, a farmer, a Veterinarian, a medical physician, a military veteran, a pilot. Oh, let’s not forget “a conservative” which appears on the screen along with his own reference to President Trump, this, an image of the President and him.

One key distinction, at least as far as the Abraham website goes is a tab not appearing on Rispone’s site.  It  is an “endorsements” tab.  He has a running horizontal scroll showcasing the politicians endorsing his campaign. Very impressive. 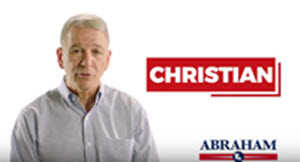 Yesterday, he posted the endorsement of Bob Livingston, former Congressman of the 1st Congressional district and almost-Speaker of the House, until opting out for personal reasons. Further down the page is the backing of powerful Republican Delegation Chairman Lance Harris and State Rep. Jack McFarland.

The media reports indicate that there is a major campaign funds difference between the two Republicans.  In a recent WWL radio interview, pollster Bernie Pinsonat said:

“We have two candidates who are going to spend at least 25 million. Abraham, he could end up spending three or four million. Then could we have another ten million spent by political PACs? Yeah, that’s easily possible.”

While polls so far have put Abraham as the man to beat in a contest to face current governor John Bel Edwards, that was before the expected onslaught of TV, Internet, print and radio ads bombarding the airwaves. Both Abraham and Rispone are not well known in Louisiana. A roughly four to one advantage in money is a load of cows milk.

So, framing the two candidacies at this point, one day after qualifying ended, both seek to brandish their conservative beliefs, their loyalty to Donald Trump, their religion, their devotion to family. One is a rags to riches story. The other is a self-made professional medical man, turned Congressman with a conservative record in hand.

One man already is the insider with plenty of political endorsements. The other calls himself an outsider and in the Trump era, that claim alone can be worth more than any endorsement.

Oh, and there's  one other point.

Rispone’s cash on hand and in waiting, surely doesn’t hurt.