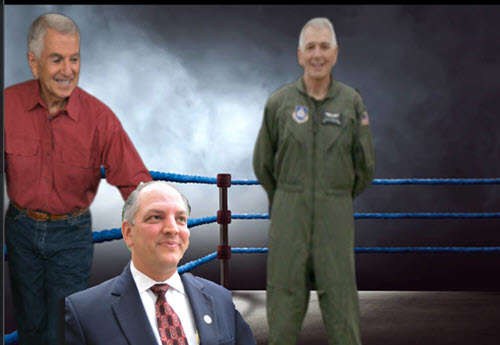 Now that qualifying is over, Louisiana voters should expect a two-month bombardment of political advertising. It will be a sprint until Election Day with plenty of events, forums and activities designed to inform, engage and persuade voters.

Although plenty of legislative seats, as well as other statewide offices, will have competitive elections, the Governor’s race will soak up most of the media spotlight. There are three televised political debates scheduled and the three well-funded candidates will spend millions of dollars on their political messaging.

For Governor Edwards, his message is that he saved the state from the financial ruin left behind by former Governor Bobby Jindal. He will paint himself as a centrist who worked will all sides to find financial solutions, expand Medicaid, pass criminal justice reform, give a pay raise to teachers and adequately fund education.

His opponents will focus on the higher taxes he supported, the expansion of state government and the loss of population in Louisiana. They will also note that Louisiana is falling behind the rest of the country and is not competitive with neighboring states who are raiding our business community. Plenty of Louisiana businesses have left the state in search of better opportunities elsewhere.

Governor Edwards is clearly vulnerable because he is a Democrat in a state that usually votes Republican. Four years ago, Edwards won because his opponent, then U.S. Senator David Vitter, had tremendous baggage and was not supported by the other Republican candidates in the run-off election.

In this race, Edwards encounters a different dynamic. While he has an enormous advantage with incumbency, he does face stronger opposition. His major GOP opponents are not as well-known as Vitter, but they don’t have his political liabilities. Neither Abraham nor Rispone have major scandals in their background. In addition, whatever Republican makes the run-off will be able to count on the support of the other candidate. No Republican candidate will go rogue in his election; the Louisiana Republican Party has learned the painful lessons from 2015.

In this election, Governor Edwards will have the support of statewide media, many statewide organizations and government employees. He will also have union support and the overwhelming backing of minority voters. There is one area that may be different in this election. In 2015, Edwards benefited from the split in the GOP and received an unusually large number of Republican votes. For example, he beat Vitter in Jefferson Parish, where Vitter lived and the area, he represented in the state legislature. It is very unlikely Edwards will receive the same percentage of GOP support in this election.

The Governor’s race will be competitive and interesting, due to the different dynamics involved. The good news is that voters are starting to take notice, which is especially gratifying since this position will play an extremely important role in determining the future of Louisiana.