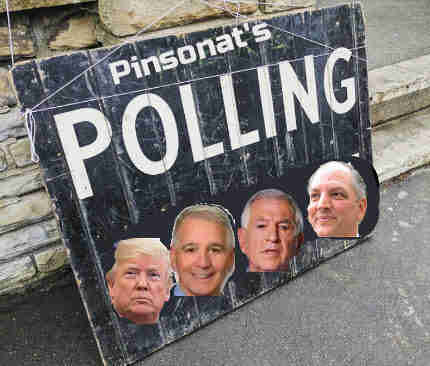 Based upon the just released poll conducted by Bernie Pinsonat Inc., John Bel Edwards appears to be able to prevent a nasty runoff but he's far from a shoe-in in his race against Republicans Congressman Ralph Abraham and businessman, Eddie Rispone. The poll indicates that with slightly more than one month left until election day, Edwards is at the cusp of victory, but not there. He needs one vote over fifty percent to deny a Republican in a one to one battle in a deep red GOP state. A runoff could be devastating for Edwards, a Democrat.

Also, Donald Trump appears to have some long coat-tails for those who want to ride them here in the upcoming Louisiana elections. His positive job ratings are 54% but his support remains through the roof among White Republican and White Independents.

Interestingly, incumbent Governor Edwards also scored a 54% positive rating. As would be expected, his demographic support is different than that of Trump's, a Republican. However, the total positive vote for the governor has dropped by 11 percent since Pinsonat's 2017 poll.

Pinsonat polled the upcoming Insurance Commissioner race and the importance of TOPS,  a very popular program helping to fund higher education.  In the insurance commissioner race, incumbent Jim Donelon's support is in the mid-thirties although that race has a sky-high uncertain vote tally. Those statewide and legislative candidates will not want to run away from supporting TOPS.

Here are some of the Pinsonat's findings:

"If the governor’s election were held as this survey was completed – very likely Governor John Bel Edwards would be reelected. With a month left, several key demographic factors will impact Edwards being reelected or forced into a runoff. 14% of white voters remain undecided, and 7% of black voters undecided. Governor Edwards is receiving 30% of white voters and 87% from black voters. Edwards is receiving 15% of his vote from republicans. Edwards should receive most of the undecided black voters. The big unknown, can Edwards hold on to his white voters in red-state Louisiana.

Ralph Abraham and Eddie Rispone  are both preforming poorly in the Orleans Metro and Baton Rouge Area. Eddie Rispone is underperforming with white voters. Unless Rispone improves dramatically with this demographic group his odds of making runoff are slim. Ralph Abraham has made significant progress in Acadiana. A month can be an eternity in any election - but Abraham and Rispone have to capture a lot more voters or neither will be around for a runoff."

Incumbent Jim Donelon is receiving only 35% of voters at this time.  The only good news for Donelon his opponent, Tim Temple, remains unknown to the vast majority of Louisiana voters. 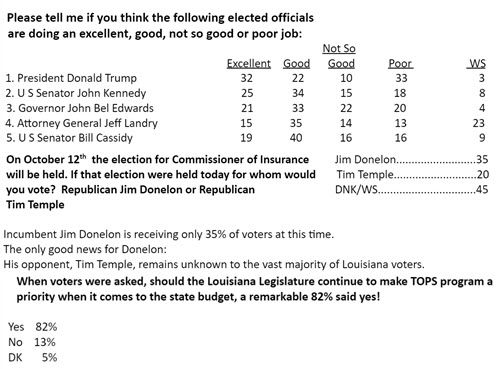 This statewide poll was developed and conducted by Bernie R Pinsonat, Inc. The project was funded by private subscribers.

Interviews for this statewide poll were completed by telephone with 500 Louisiana chronic voters from September 3rd  through September 6, 2019. Forty Percent of calls were cell. The overall margin of error for the statewide statistics obtained from the survey data is not greater than plus or  minus 4.4 percentage points at the 95% level of confidence. In other words, there is a 95% certainty that the statistics presented from the results obtained on this survey of 500 chronic voters statewide will not be more than 4.4 percentage points above or below the figure that would be obtained if all of the chronic voters in the state would have been interviewed.

A statistical weighting procedure was employed to normalize the sample to the chronic voter population-based on voter race and age category. White, black and other. W60%  B29% Other 6%