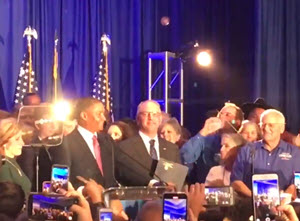 The day after the election political analyst and pollster John Couvillon of JMC Analytics and Polling published the following:

As both the decade and the 2019 election cycle comes to a close, JMC would like to analyze the results through the prism of the December 2002 runoff that saw Democratic Senator Mary Landrieu re-elected, as there are similarities between that race and Governor John Bel Edwards’ successful re-election race (that comparison was also made in this prior article).

Increased black turnout: Between the 2002 primary and runoff (when former Senator Mary Landrieu saw her share of the vote increase from 46 to 52%), the black vote went from 26 to 27% of the electorate. And while we don’t have complete and official figures yet for the runoff, we know the following from available data:

Black early voting increased from 25 to 31% of the total early vote between the primary and runoff (in person early voting didn’t exist in 2002, so we can’t use that race as a basis for comparison);

Diluted Republican runoff vote: In 2002, 51% of the primary vote went to one of three Republican candidates running. But while turnout decreased 1% between the primary and runoff, it dropped even more (7%) in the 5th Congressional District, which is where the eliminated Republican candidate lived (the eliminated candidate also happened to be a medical doctor, which is yet another similarity to this year’s Governor’s race). Similarly, in this year’s gubernatorial primary, 52% supported one of the Republican candidates, but in the runoff, turnout in white precincts (as mentioned above) only increased 1.5%, yet even with this anemic increase in turnout, Governor Edwards’ share of the vote increased from 31 to 33.5%. In other words, there were obviously some supporters of Ralph Abraham who crossed party lines to support Governor Edwards instead of Rispone in the runoff. A salient exhibition of this behavior was in the Alexandria/Monroe media markets (the epicenter of the 5th Congressional District), where the Edwards vote went from 35 to 41%. Since another 46% supported Abraham, it’s obvious that about 10% of the Abraham vote “crossed over”;

Early voting sets TWO new records: Since its inception a decade ago, early voting has steadily become more popular in Louisiana. In the 2007 statewide elections, 11% early voted. That number has steadily increased to the point that 28% voted early in the primary – a record at that time. And since records are made to be broken, 33% of the runoff electorate voted early (a new record), while the 503K who early voted was the highest volume of early voting ever for a non-Presidential election, which broke the previous record of 386K in the primary;

Was there a “cannibalized” early vote? When early voting volume was substantially up compared to the primary, the thought among some political observers was that the Democratic tilt of the early voters was a “front loading” of that vote that would be reversed on Election Day. In fact, the opposite occurred. The early vote favored Governor John Bel Edwards 254-246K (or 50.9-49.1%). However, Governor Edwards also carried the Election Day vote by an even bigger margin: 520-488K (or 51.6-48.4%). This is obviously a testament to his “get out the vote” effort which never took its eye off the ball from the first day of early voting until Election Day;

In conclusion, Governor Edwards’ increasing the number of black voters while also getting enough of the vote that went to Ralph Abraham were his two keys to victory (in addition, of course, to support he already had from less partisan Republican voters residing in the urban areas). It was not a partisan victory, as he ran 10 percentage points ahead of the Democratic candidate for Secretary of State. And is an instructive lesson for those seeking to win a statewide office.