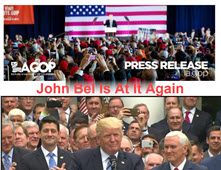 All of this came roughly only seven years after the then-Congressional Republican minority moaned and groaned over the way they and the American public were mistreated by Democrats for its own pitiful "ramming the Affordable Care Act down the throats of the American people".  However, while the Republicans had months to review the legislation in essentially its final form in 2011, not so, for the Democrats in 2017.

As we break for the Christmas holidays, Republicans nationwide are in giddy cheer for a job well done. So far, they have reasons to celebrate the new year, early. Americans can expect to receive more of their take home pay, although there is still plenty of un certainty and discussion as to whom is going to pay for this Christmas gift to America.

Nonetheless, here is Louisiana,  while Republicans and others are also enjoying in the historic revelry, the state GOP leadership is a little peturbed about some other money affairs. In an email today,,the Republican Party slammed  Louisiana governor John Bel Edwards, who is entering into his third year in office amazingly the most popular statewide elected official, albeit a Democrat in a raw-red Republican state. The topic of concern?  The governor, earlier this week, made comments at a luncheon regarding how he hoped to deal with its annual budgetary emergency which has become common place ever since Republican and then Presidential hopeful, Bobby Jindal took over the mansion.  The problem? The  massive fiscal cliff budget deficit of roughly one-billion dollars.

The next year for the Republicans is so-very important. Around this time, the early part of the second year of a four-year gubernatorial administration, politicians begin to jockey for position to run for various seats including for Governor. There are a number of high-positioned Republicans ready to pounce, however, Edwards's aforementioned popularity in a recent SMOR poll indicates that he is far ahead of all other likely republican competitors.

Whether gubernatorial politics is the issue for the pre-Christmas email to party faithful or simply providing a gentle holiday reminder that it is the Republicans who hold the majority in the legislature, not Edwards and his dems, it is still very "Christmasy Ho Ho Ho funny" that the local party, after what's occured lately up in Washington DC, would be talking about openess, transparency and respecting the legislative process.

Here is the email from the LAGOP

ohn Bel Is At It Again

Baton Rouge- Yesterday, Governor John Bel Edwards issued an ultimatum on calling a special session to address the state's looming fiscal cliff of the 2018-2019 budget. "We will only call that special session if there is an agreement in principle between myself and leadership as to how we will address the cliff," said Edwards.

"This Governor's appetite for spending is out of control, and now he is refusing to call a special session unless legislative leaders agree to his tax increases before the session even starts," said Roger Villere, Chairman of the Republican Party of Louisiana.

"What is the point of electing our legislators if the governor seeks to force a handful of them to agree to his plan before a single committee hearing is held, or a single bill has been filed?" asked Villere.

"Many of our legislators would actually like to see a bill, have committee meetings and give the public an opportunity to comment on the governor's plan before they sign on to anything," said Villere.

"Once again, Governor Edwards is hoping to sidestep the full legislature addressing how it wants to solve the fiscal cliff," said LAGOP Chairman, Roger Villere.

This is the second time in the last month that the Governor has attempted to circumvent the legislature. Just before Thanksgiving, Governor Edwards started proceedings to cut the legislature out of the process of approving a 23 month extension of $15.4 Billion worth of medicaid contract extensions.