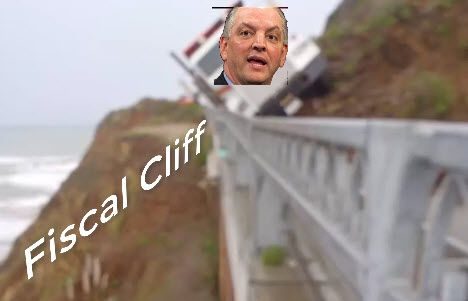 Louisiana Governor John Bel Edwards is going on a full-court radio press to push his side of the fiscal cliff.

Today, the Governor sent out the below summary of his administration hitting the airwaves:

Gov. John Bel Edwards and officials from his administration recently spoke with local radio stations around the state explaining the governor’s plan to prevent the looming fiscal cliff as the time to call a special legislative session in February quickly draws near. You will find a few helpful clips below.

Talk 107.3: Walking to the edge of “the fiscal cliff” with Gov. Edwards

Host: When things come up like cuts to TOPS, cuts to colleges and cuts to some of the health care programs—there are detractors who accuse you of fear mongering with these sorts of things…

Gov. Edwards: "Look, I tell the truth. If the truth is scary to people, then it is scary to people. But, you know what? As soon as I finished proposing my budget to the legislature, the budget is theirs. If they believe they can rearrange the numbers and fashion a budget based on the forecasted revenue that doesn’t scare people, that responsibly makes sure that we continue our critical investments and the priorities that people want, they have the opportunity to do it. They are not going to be able to do it because the numbers are that big… I’m not asking for more revenue in the next fiscal year than we got this year. So some people say I’m trying to raise taxes—no I’m not. If you look at what I presented the other day I am trying to replace revenue that is expiring in the amount of $1.38 billion with $994 million. So it is actually less. I am confident we can get this done. We need to get it done and we need to do it in February."

Commissioner Jay Dardenne: "Let me say something before I take your questions. I am really tired of all the misinformation from people who just don’t want to see this administration succeed. It is time for elected officials to speak honestly, to put up or shut up and put some reality behind the political rhetoric we are hearing. I will challenge any member of the legislature or any organization that has appeared on your show, for that matter, to come back on your show and present a written, specific proposal they’ll agree to introduce as an amendment to the budget that will cut $1 billion—just as the governor was constitutionally required to do in the executive budget before July 1, 2018...Here is where the rubber meets the road. Where specifically are you going to cut $1 billion out of what is about $3.4 billion in state general fund income that is not constitutionally dedicated? You can’t do it responsibly. I’m telling you, you can’t do it responsibly."

Host: If we need more money and the governor doesn’t want to raise taxes and we can’t cut our way out, where is the money coming from?

Adley: "All John Bel Edwards has ever asked for is to take the study committee that the legislature themselves created, take all of the proposals they made, take whatever you want as long as it is revenue neutral within the temporary taxes that the legislature have already passed. Now, John Bel has a list of those things that he has already looked at and things that make sense, but at the end of the day there has to be new changes to the tax structure to make it more broad-based—no different than what our good Republican friends in Washington believe we ought to do. He is doing exactly the same thing."