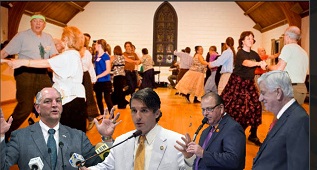 As part of a winter-spring annual shindig, the state budget is once again out of whack. This time, the one-time fix of a one-penny sales tax will expire on June 30.  The hole is roughly one billion dollars deep and is as far as the eye can see.

Edwards wants to call a special session to fix the problem now but won’t unless he feels assured that he has a deal on the fix. Part of the deal obviously are taxes.  The session cannot begin until seven days after he makes the special session call.  Time is running out. The general session is approaching next month but it is a regular session, not a fiscal session, therefore, no revenues can be raised to fill the hole.

The Fiscal hawks, making up of the likes of Republicans Cameron Henry and Speaker Taylor Barras see it differently. They don’t want to raise any taxes unless there’s major reform and cuts. Making matters even more difficult to arrange a settlement on the issue, some seem not interested in raising any taxes or extending the current one-penny emergency sales tax, at all.

In the middle are legislators and a groups of state senators led by Republican Senate President John Alario who want the Governor to “just do  something”— call the legislators in a special session now, regardless, so that with everyone focused, a deal will be had.

Last week, during a Facebook Live, Louisiana pollster, Bernie Pinsonat and I discussed numerous issues including the budget dance. In this segment below, the focus is on one leg of it, that is, the fiscal hawks.  Importantly, Pinsonat described the forces the fiscal hawks face every year when the issue becomes taxes or cuts.

The yearly legislative dance inevitably rises to a budgetary stalemate that rarely gets resolved until the legislative session music ends only moments before the clock strikes Sin Die.

Here's what's bad about it, Republicans can sit down and start cutting across the board--cutting the agencies and their base wouldn't care.  I mean most of their base doesn't really-- they're affected by government but not nearly as dramatic as people who need government assistance. But you dare, you dare the upper income income, but you have to be careful with from higher education.

The most educated people in Louisiana do not want to pay more taxes or any university and but but they should have appreciate it the most.  But if you ask them do you want to pay an additional or income tax or penny sales tax or anything else for for LSU or any University and they're not there.

The poor people, the lower middle class are much more supportive of raising revenues for educational institutions.  Now when you get to local schools, K through 12,  everybody is supportive of them because all of the kids, beause all of those kids are affected.

Then, but if you're talking about like last year the transportation tax ,same thing everybody thought my poll was really solid, they liked it, John Bel Edwards was doing good and yet everybody ignored the fact that vast majority of Louisiana said "I'm not paying more money for gasoline tax, and you know what, the Republicans wouldn't budge-- because back home they would have been beat for re-election if they had voted for that.   If you're selling concrete, I can understand why you want him to vote for it, but they know that the only people who show up at the capitol, push for a transportation tax were lobbyists and special interests who would benefit from the tax.  And what was missing was--the ability to convince a majority of voters in Louisiana that this was necessary and watch seven hundred million dollars leave the state trooper, I mean, the transportation funding going into the state troopers budget.  Give me a break!

The other problem Steve is and you're seeing it locally you're especially areas like Baton Rouge,  people don't believe that laying more concrete is going to make their life better.  What they are,what they're facing is--every time someone bwants to build a new road or build a  highway, or even the interstate, it only means that more people are going to access i,t because there is no limitations on lights and so they build a new road for to get traffic moving, which is what we're supposed to do, yet within six months it's another parking lot of traffic, the trouble is, the five or six major arteries that we will build all these wonderful four lanes into two lanes and it's going to make everybody late.   Well, now, there's a  this it was traffic jams and parking lots from 5:00 to 6:30, so, they're seeing that pouring concrete in creating more roads and highways really doesn't make their traffic experience any better.

That's that's one of the problems--so a lot of these in Louisiana-- you want to know why we're red state, you watch it all the time I do too, when 80 percent of all taxes proposed in in Louisiana and across the state are struck down, or mutilated, or beat up--and they fail, because there is no public doesn't buy from government all that elected officials claim we need.  And when it fails, then it really don'--there is no great consequences.

I'm going to say they are not needed, I'm saying that the ability, to to ability to get voters to have a preference or being supportive of taxes is sorely lacking and somebody seems to-- between-- I guess what I'm saying we need a different approach, we need better explanation to convince voters, it's going to make them life better, not make some bureaucrat or some somebody who's in that business, make his pocketbook matter because they don't believe that what they're telling them, and they're going to reject it