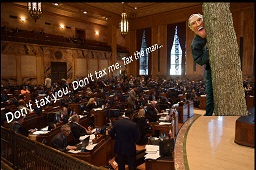 So, now, the issue is, what, if anything, is the Republican-led state legislature willing to cut and what revenues is it willing to raise?  Of course, then, there is the question whether the governor will be on the same page.

Last week, Louisiana pollster Bernie Pinsonat and I discussed these and other issues when we engaged in a Facebook Live event.  Below is a short narrative that describes the popularity of TOPS vs. taxes and the choices and options the Governor and the legislature have to fix what is called the fiscal cliff problem..

In short, Pinsonat agreed with my opening proposition that voters don’t mind raising taxes as long as the other guy gets hit.  He reminded me that this was the Russel Long expression—“Don’t tax you, don't tax me, tax the man behind the tree”.

Pinsonat believes Louisiana voters don’t like the penny sales tax that went into effect in 2016, although roughly 53 to 54 percent of the voters approved of it.  The penny sales was a quick fix for a $1.7 billion dollar shortfall.  That tax, being temporary, ends June 30.  Speaker Taylor Barras has said don't take the sales tax off the table akthough the Governor and the Democrats don't like it since it hurts the poor, the lower income and the elderly more than other taxes.

Yet, Louisiana voters don’t want to cut the popular TOPS program that provides money to help fund college students tuition.  The legislature did so in 2016, refrained from cuts last year.  Edwards has once again put TOPS on the cutting block which reduction, many Republicans oppose and they control the legislature.  Even more adamantly, they don’t want their income tax to increase .  Pinsonat said roughly 80 percent made their feelings known on that issue during a recent poll.  Pinsonat said whites, blacks, Hispanic, everybody just about, is adverse to increasing income taxes.

Pinsonat said, the public simply does not want to cut TOPS or raise taxes, especially income taxes.  In short, they side with now-US Senator, former State Treasurer, John Kennedy, who so emphatically claimed, we “have a spending problem, not a revenue problem”, which he continues to say when describing the federal budget..

"No tax, no cuts of my favorite program" is the Edwards’s ultimate problem. Despite cuts made over the course of the Jindal administration and during the two years of the Edwards term, Louisiana voters essentially still believe they can eat their TOPS and other cakes but don’t have to raise money to pay for them. Pinsonat feels that voters believe if government just looked hard enough again, they would find the money, for sure.

Pinsonat believes nobody has articulated the case why taxes need to be raised to satisfy the voters.  Which indeed can be troublesome given there is no consensus as to what taxes should be extended or raised or what cuts should be made.

Which will be Governor Edwards’s line to walk as he calls in the legislators, especially those who are told by their constituencies, “don’t come back home with more taxes”.

Which quandary, once again, puts the Louisiana governor and legislature and voters, behind the proverbial tree.

Watch the video segment which starts at 33 minute mark and ends at 43 minutes, 37 seconds.

More in this category: « Louisiana legislature should appeal fund sweep court ruling Governor Edwards to call Special Session to overcome fiscal cliff: Ready or Not? »
back to top