Maness: Time to drain the Louisiana swamp too 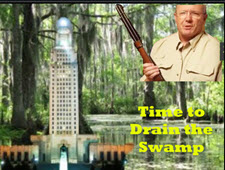 We know there is a swamp in Washington DC that President Trump promised to drain although some might argue that the only things that have changed are the critters that habituating it.  But, other than our Bayous, does the State Capitol in Baton Rouge own its own swamps too?

Also, since the recent Louisiana Governor’s election two years ago, we have discussed major changes in the budgetary practice, not just nipping at the edges.  But, as the state wades through its fifth special session since John Bel Edwards took over the mansion, aren’t we getting more of the same old, same old”?  Isn’t it time to radically change the way we do business and raise revenues?

These were two of the issues discussed Friday when Retired Colonel Rob Maness and I engaged in a Facebook Live event and talked about the Louisiana legislative session taking place at the capitol. Maness had run on the slogan “Drain the Swamp” when he first entered the political scene running against now US Senator Bill Cassidy and then-Senator Mary Landrieu in 2014. During that election, he used the twitter hastag #Draintheswamp which later became popular during the Donald Trump for President campaign.

Here is a short transcription to each topic.  You can watch the video by clicking on the Youtube at the 12:46 mark.  The segments ends at the 16:04 mark.

SABLUDOWSKY: Is there a swamp in Baton Rouge, too?

MANESS: Oh yeah, there's a swamp in Baton Rouge.  Absolutely there's a swamp in Baton Rouge.  Look I spent the last session working as a citizens lobbyist last year and you could see that the wealthy lobbyists come in and they get people to change their minds, you can see it every day, just to go sit in the committee rooms and listen and watch people move around if you know who the players are you can tell.  And of course, there's always something going on behind the scenes, you know, and money talks.

A citizens lobbyists like me we're not up there spending a lot of money, we're just up there trying to talk and convince from a principled perspective the legislature, legislators and them doing what we think is the right thing invest for the citizens of Louisiana, but the big-money interests whether it's a Democrat big money interest or a Republican big-money interests, it doesn't really matter.  There is a swamp there and they tend to get their way over the interests of the people of Louisiana just like what happens at the federal level they tend to get their way in the interests of themselves and their policies as opposed to what's right for the country.

SABLUDOWSKY: You mention about getting rid of the income tax, so what would we replace it with I mean obviously property tax is very very low.

MANESS: Yeah our property tax is very low, I like the Texas model, I've spent many years in both states now and we could take another look at property tax but also make a really strong consumption tax policy.  Take a look at the federal fair tax model that's been proposed and is in a grows in support every year.  I mean it's been up there for years if you take a look at House Bill 25 I think was the last number that was assigned to the fair tax bill there are ways to keep a consumption tax from being overly regressive on the poor and I think that there is a possibility that we could take a look at thatl.  You also you've got to take a look at if you eliminate the corporate income tax you also eliminate the the freebies.  You know, so you know--freebies like property tax freebies and those kinds of things, so that every company is incentivized to come here and we can compete with states like Texas who don't have an income tax.  But they still pay property taxes, they pay consumption taxes just like everybody else and I think that's what there's an opportunity to take a look at that and there's been some talk about it, I know, that LABI'S  president Mr. Waguespack,  Stephen Waguespack has talked about a sales-tax-only-type- system.  I know Jindal proposed it but really didn't put a lot of a lot of fight in the effort but I think, I think they're the majority and if you had a governor that was willing to take a leadership role like Mr. Edwards has the ability to do because of his numbers, then you have the possibility of something like that happen.