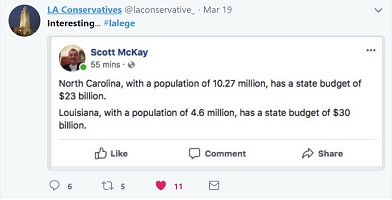 Why is the Louisiana budget so much higher than the budgets of the other states, even the Southern states which Louisiana is often and justifiably compared?

Wait. You mean, the comparisons being made--claiming Louisiana spends so much more than other states with comparative larger populations, are, perhaps, not correct?

On Friday, during an interview with Elizabeth Crisp, reporter for The Advocate, I saw an interesting tweet and put it up for the viewers to read. That twitter statement directly alleged that Louisiana is spending substantially more per capita than states such as North Carolina, a state with considerably greater population?

I thought the numbers, if true were shocking and wanted to see how Ms. Crisp felt. Jim Brown chimed in to give even more perspective.

Here is the video and the discussion. The pertinent point of the video starts at the 19 minute, 27 seconds and ends at 22 minutes, 24 seconds.

CRISP: And if I could if I could just jump in I think I actually replied to that tweet and showed where that is not accurate.  If you go to, I included a link to it's the, National Organization of State Budget Officers-- you can see where those numbers come from, so that is actually Louisiana's state and federal budget--where it's North Carolina's general fund.  So that doesn't include the federal funding.

BROWN: So  I could collaborate a little bit more Steve, and like you say, I'm very buoyant on North Carolina, many of their procedures in the insurance area, they're so far ahead of us in Louisiana but I think here's where maybe as information for the person that tweeted, we we if you look at the legislature and that's one of the questions I was going to talk to Elizabeth about, we have so many things that are both require approval out of Baton Rouge that really are local matters as well as funding.  Let me give you the biggest example of course is the Superdome, I mean no other state in America are there state funds that fund a Dome Stadium for a football team. In Dallas, the Dallas Texans get some help but the city of Arlington underwrote the bonds.  Because they felt like that's where the stadium is. You can go right down the line.  In Louisiana, every small group comes to the legislature--says fund us, fund fund us, fund us--so if you combined the local spending and you combine the state spending you'd see that things would even out a heck of a lot more because in North Carolina local governments don't come to Baton Rouge.  Charlotte didn't come to Baton Rouge for their football team or the basketball team and many things they do in Charlotte.  Their transportation where many of the same cities traditionally, because of Huey Long, we have this populist government become the state capitol.  So, in answer to that tweet, that's another factor too in terms of the fact that state and local together, you add them together, and we're not that far out of kilt with North Carolina.

As i have done this week, I published the comments made during the Crisp interview. However, I wanted to do a little more research into the facts to get a better idea who was more accurate, the tweet or her.  This is what i discovered:

Below is a comparison taken from Ballotpedia which compares the state budgets and the federal contributions.  Ballotpedia receives its information from the organization cited by Elizabeth Crisp, the National Association of State Budget Officers. According to that organization, as of FY 2016, the total spending for North Carolina was 44 billion, 367 million, not $23 billion, as alleged in the tweet. That is a difference of roughly $21 billion or nearly 50% less than the total North Carolina budget.

The tweet also claimed that Louisiana has a state budget of 30 billion. Thoretically, true, if you add the federal and state conributions as indicated by Crisp, which apparantly the tweet did not do.  Actually, the total Louisiana budget amount was 29 billion, 603 million dollars, with the state spending slightly less than 60% of that total amount from its own funds ($19,265 billion).

However, based upon the numbers below, the tweet is far from being accurate.  The total spending for North Carolina was $44,387, not 23 billion, shy by a mere 21 billion dollars. With a population slightly over ten million, the per capita spending for North Carolina was $4.373 or roughly twice that as implied in the tweet. Computing Louisiana's total spending, compared to its population, the Louisiana per capital spending was much higher, $6,323.  Thus, indeed, Louisiana does spend more per person than North Carolina but if one digs a little deeper, you obtain a totally different picture than that alleged. 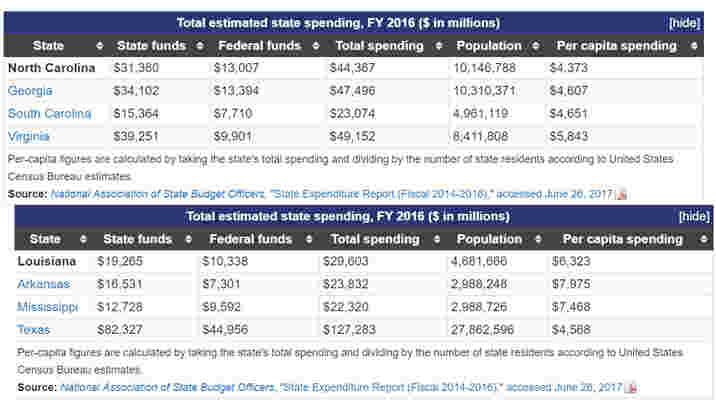 In terms of the revenues received by Louisiana from the state within, the actual per capita cost for Louisiana was $4,115 of the $6,323 per person with the feds picking up the difference or $2208 of the tab. North Carolina?  Its total per person is $4,373 (which is $1950 less per capita than the total spend for Louisiana) with $3,092 coming from the North Carolina State coffers. 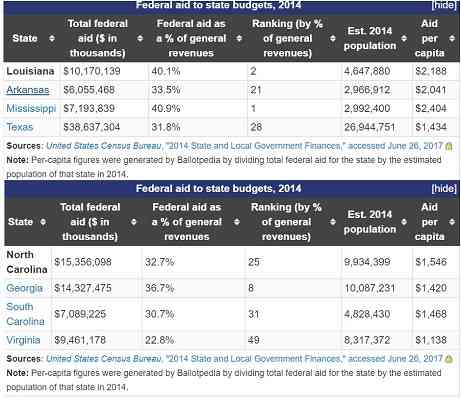 So, Louisiana received $927 more per person from the federal government than did North Carolina.  Louisiana also spent $1023 more from its own state's revenues than did the northern, more populated state.

In sum, Louisiana spent $96 more per person than did North Carolina pay (not $3940 per person) when adding together the two states's respective locally-received and federally-received revenues.