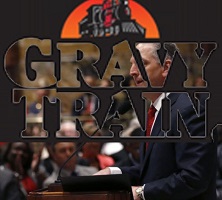 The average state ratio of spending on nursing homes to waiver programs is 60:40, while in Louisiana it’s 77:23.

The rate of inflation in the past decade has increased 18 percent, but the state’s nursing homes have seen their rates rise 54 percent despite an almost-unchanged occupancy rate.

The industry by law can enjoy a profit margin of over 18 percent, thanks to a low-cost environment partially enabled by state law. Yet instead of plowing these funds back into care, Louisiana’s nursing homes ranks consistently close or at the bottom of quality among the states.
But many legislators, whether like Republican state Rep. Bob Hensgens who works as a nursing home administrator, or like Democrat state Sen. Jay

Luneau who takes substantial campaign funds from the industry (and former state Sen. Joe McPherson whom he essentially replaced, who then and now continues to shill for nursing home interests) won’t support these kinds of bills. In the committee hearings on the two bills both had the audacity to say they supported funneling more money to home- and community-based services without acknowledging or addressing the wasteful, inefficient spending favoring nursing homes.

And both are hypocrites of the highest order. While Luneau prevents rebalancing of the state’s long-term care spending to make it more efficient, he rails against business tax exemptions he says are wasteful. Yet given direct evidence of such waste in spending on long-term care, he entirely loses his appetite for making government work smarter and would rather increase people’s taxes. Luneau also criticizes legislators who “never have solutions, only rhetoric,” saying "I think any legislator who thinks it’s so easy to cut state government should be man or woman enough to stand up and say this is what should be cut and why.” That some make the very suggestion and he dismisses it shows what an empty windbag he is, if not actually turning his own criticism against himself.

For his part, Hensgens has questioned the spiraling growth in state Medicaid costs. Nursing homes consume $1 billion annually of that, yet when presented with an opportunity to do something about that, he resists. And can’t he understand he can’t be against rapid growth in Medicaid while wanting to increase funding to home- and community-based solutions without controlling excessive nursing home costs to taxpayers? Unfortunately, the Legislature has too many cowards like Luneau and Hensgens, and not enough of the likes of Appel or Bacala, or state Sens. Dan Claitor, a Republican, and Ed Price, a Democrat, who provided the only committee votes in favor of Appel’s bill. But perhaps the most malleable feet of clay belong to Democrat Gov. John Bel Edwards, who by issuing a simple order could institute the contents of the two bills.

During his campaign, wherein nursing home interests donated significant sums to his campaign, Edwards said he favored the models envisioned in the bills. But as soon as he got elected, he did an about-face, and now says the matter needs more study – despite that fact managed care has worked well for the remainder of Louisiana’s Medicaid population and the legwork for the transition already took place before he entered office. That makes him the biggest hypocrite of all, but he has lots of company. Appel notes that these politicians are on the wrong side of history, observing that fiscal pressures will force changes that send relatively fewer dollars to nursing homes and more to other solutions. It’s just a shame that it must happen later rather than sooner, and in the interim, more fragile citizens and taxpayers will suffer needlessly because of the actions of a few.