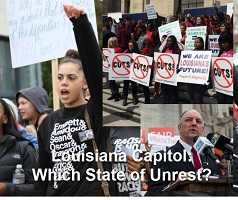 We have teachers leaving their classes, protesting low pay and inadequate financial support for schools; Kids are taking off from class in droves, making sure their once muted voices are being heard on matters such as gun-control and weapons in schools. Once again, the state budget is a total mess and the voters are up in arms.

All of this hysteria is taking place at the state capitol where legislators are fearful that elections season, about ready to start, will end their political careers.

So, is all of this emotional display occurring here in Louisiana?

This morning, I discussed the legislative terrain with two of the most respected political minds in the state. Both have decades of personal experiences and involvement at Baton Rouge, the seat of the Louisiana government.

Do either of the two men see the Louisiana political world erupting? Are they in sync with one another regarding the emotional room temperatures in the committee rooms and chambers? Is there a revolution quietly brewing within the voting public? Is there a blue wave creeping over the Republican-red House and Senate?

Is the session about to explode or are the ho-hums filling the air on matters of guns, education, healthcare, budget and other annual topics? Do the legislators need to watch their backs as election fever is about the mount?

Here is the transcript of the first segment of my conversation with the two senior political and legislative observers. Below is the video of the entire one hour discussion about these and other issues.

What do you think?

BROWN: But if you pick up morning papers today or looked at Bayoubuzz.com, you'll see so much going on. Teachers carrying guns that was shut down in the very cantankerous debate. I saw a legislator from Shreveport say that we have, "we have to teach our children not shoot our children" --very electric debate over whether teachers. It wasn't a reasonable debate, it is either yes or no. And it was not a very reasonable debate, a very emotional debate is the point I'm making.

BROWN: There was an interesting bill on nursing homes, for example, putting a camera in a nursing home for a loved one-- I thought it was a great bill, representative Helena Moreno, who's going to be leaving the legislature for the New Orleans City Council in a couple of days.  And that passed strongly and it's a bill I think is a good bill. Elections on Sundays--you know I was the elections officer for years as Secretary of State--and the highest turnouts in the world for elections are in countries that have Sunday elections. In Switzerland, for example, they get 85-90 percent turnout on Election Day. I think our last election was 13 percent. So it was interesting idea and this didn't go anywhere but the idea is you go to church if you did that or take your family and go vote. It can't be any worse than it is in Louisiana. But that piece of legislation was shut down. Interesting also the jury vote. Louisiana is the only state in the country that requires a ten to two vote, a split decision. One other state has it in except only in death penalty cases, we're the only state in America that requires a 10 to 2 decision not a unanimous verdict. Whereas, every other state and the federal court system requires a unanimous verdict, so that got a lot of attention. It was very interesting across the board if you were a legislative watcher to see all these things going on. One thing I did not see and now quit talking here and let Bernie get some perspectives was that in other states across the country, teachers are marching on the legislature, in Oklahoma, up in Kentucky--demanding higher pay. In Louisiana, we have one of the lower pay rates for teachers in the country. There's so much focus on what we can do about improving education but not a peep out of the teacher groups about pay us more money. I think the average teacher makes about forty eight thousand a year, national average is 58,000. Southern regionals right at fifty thousand dollars a year. So teachers are very quiet in terms of the pay raise. But but no controversy there. But a lot of interesting legislation taking place this week if you're a legislative watcher.

SABLUDOWSKY: Why don't you follow up with that. Your observations in terms of what you're seeing this week.

PINSONAT: The House is actually quietly moving forward that all of the bills, I mean, they have they have had so many bills and this is a very short session. You have a budget to deal with. And then you had the controversial issues like guns that are being thrown into the session because of outside events while you had an inside event year, the Sterling case here, so back and those are sideline shows which we always have--guns are, correct but guns are always at our session they're always being, they're trying to put them in churches. We've tried in barrooms Guns are are--actually--nobody is going to mess with your gun rights in Louisiana. You may, i think there's a bill to move to 21 years old.  I don't think any thinks it will  pass . Guns will end up being status quo.

SABLUDOWSKY: But that's, that's one long rifles am I correct.

PINSONAT: Yeah. Yeah. I don't know if that's going to pass--Louisiana is pretty much an NRA, gun-pro.  The governor is the same. Most of the legislature is that way so I don't expect to see that much change but Jim's right--thereis a lot of activity on all related to legislation. We have the, the normal minimum wage and equal pay legislation that Governor supports, most Democrats, a surprising turn of events last week--the Senate killed both those bills and those were supposed to be gimmes for the governor and his supporters and they got beat. i think they're trying to bring those back. That's interesting that that will be something that's worth watching to see if there is a discussion about--has the governor lost some of the Senate.  Is the Senate becoming more Republican because reelection is right around the corner and the house is already Republican and it's not going to getany less.

SABLUDOWSKY: So this is a blue wave wave?

PINSONAT: Not at the Capitol.

PINSONAT: The Senate made a statement and Jeremy Alford wrote about it and I picked up and you were picking up, you  had senators telling you quite frankly, "look, contrary to popular political opinion around the building the Senate is not in the pocket of Republicans, especially not in the pocket of the governor. So all of sudden, two of these major pieces of legislation got beat which we thought were gimmes--coming out of the Senate--didn't even get and and was killed on the Senate floor, so it would be interesting to watch that because that's a test--is the Senate more independent. I'm not saying that it is going to go totally away from him but it will probably going to happen because of the elections next year of which most of those guys start running at the end of this session.  Go back home and start re-election--most of them are, by the way, commenting on the session-- most of them went home. And contrary to some of the stuff you read, very few of them a wave talk to them the session. There were--the Republicans will say that they said I'm glad you--But there wasn't-- there was a lot of controversy at the capitol but back home, I moved around the state quite a bit towards the end of that and it was like nothing happened.

People thought--that-- I don't find disgust with that, they just don't buy the argument after 10 years we continue to have these deficits and we can't do anything to fix them. And they may be discussed and the overall process but most legislators and I'm polling it--they're very popular back home.  You're not going to beat most of these people. So that's my general observation is that the capitol is a mess, there's no end in sight--probably because of no leadership on anybody's side. But the public is, quite frankly, abandoned--caring about it.  Because after 2009, by the way, we started off every year with "we're broke" and we don't have any money and I don't think the public buys into it and it just kind of lost interest in the yearly circus at the Capitol, trying to find money to fund the deficit and it never seems to the end--it's like a merry-go-round.

More in this category: « Is Karen Carter Peterson gun shy about the Second Amendment controversy? Maness says gun control bill to limit under-21 access, in Louisiana legislature, is harmful »
back to top