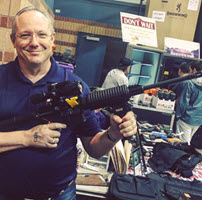 Gun control and gun politics, is, continues to be a hot topic at the legislature this week. A bill to limit the anyone under the age of 21 from being able to purchase what was deemed by the legislator that authored bill as an assault rifle was passed out of a Senate committee on the vote of a Republican and that Republican has since under a lot of pressure changed and said he's going to vote no against the bill on the floor of the Senate. Because you know the civil rights activists that support all the amendments to the Constitution but are but ones that focus on the second amendment are adamantly opposed to men and women that for instance can go serve their country and carry a firearm safely and effectively. And they don't go out and kill people and those kind of things that are quite oftentimes 18 19 and 20 years old. You know and sometimes you have single moms that are 18 or 19 years old that want to buy a firearm for the purposes of protecting their family or a young man that is a single dad and there are citizens that are of the age of majority in this country and they shouldn't be kept from being able to purchase that.

So so you know the the folks that I'm part of a team called the Louisiana Self Defense Coalition which is a loose network of grassroots Second Amendment rights activists. Look we we went down on the record and said look we're going to run a radio ad against you and don't vote this way because you're violating our rights and you're attempting to tear up our the second amendment right to the U.S. : Constitution and our rights under the Constitution of Louisiana. By taking this ability for a young person a young adult to purchase a firearm of this type and then on top of that,Steve, you know the bigger debate is and I was disappointed in watching and observing the committee hearing on this particular bill it was SB 274 will come up on the floor of the Senate next week.

Is that, is that the author of the bill was asked if legislators hunting rifle that's Remington 3 0 6 automatic or thirty six automatic, that was handed down from his grandfather to his dad to him when he was a kid that had a 15 round clip on it. He used the term clip through the magazine would that be illegal for him to purchase or give to his his son or daughter that was under the age. And the individual said yes. The definition of what is and is not an assault rifle. It was poorly crafted in this case. It was not a good piece of legislation. But the bigger even on top of that is these bills really have no definable and quantifiable effect and would not have done anything to prevent something like what happened to Parkland. And that's where all of these bills are coming from. Once again as an emotional response. They really had a situation where 17 kids were tragically murdered by a killer, by a killer, regardless of how old he was. And several government agencies failed in their response starting with the FBI.

: The local sheriff's department, the risk, the four officers stood outside that building and didn't enter it to try to take that killer down. You know, all of those failures, and none of these bills--don't do anything to address that and nobody really even wants to talk about that and talk about real policies and real changes we can make to make our schools more secure, have our kids be safer that don't revolve around trying to take the civil right away from law abiding American citizen.