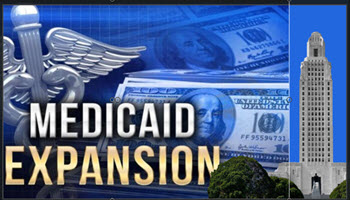 Moller is the Executive Director of the Louisiana Budget Project, a progressive organization that focuses upon the needs of those on the lower run of the economic ladder. On Thursday, we published part one of the interview, dealing with the Fiscal cliff vs. budget shortfall confusion.

Here is Moller's explanation of Medcaid expansion as an economic development benefit and the video of the entire interview. This segment started at the 29 minute 23 second point on the video.

SABLUDOWSKY: Because of the federal money that we're getting for the Medicaid expansion and and he's talking about expanding he program that we already have, that it's economic development 19,000 jobs--then other people say well wait a minute you know we're actually you know the money that we're spending the additional money they were spending goes to medicaid expansion.  So maybe you can clear some of this up for, at least for me

MOLLER: Well first of all, LSU did come out with a study this week and it was a very good study, you know we've we hear about the impacts of various economic development projects all the time and we always used to hear about--"well these are the direct jobs that are created and these are the indirect jobs" and what this study did from from LSU, from Jim Richardson actually the economist sits on the revenue estimating conference, applied that same logic to Medicaid expansion.

And the fact is you know what what Medicaid expansion did, the reason this is such a good deal for the state is right now in the traditional Medicaid project program, about 35 40 percent of the money comes from the state and then it's matched by the federal government which puts up the other like sixty, sixty-five percent.  The match rate changes every year a little bit.  Under Medicaid expansion which covers working age adults under a hundred and thirty eight percent of poverty--so you have to be between the ages of 18 and 64 and you have to have an income, if you're a single adult of of roughly about you know fifteen sixteen thousand dollars a year or less, you're eligible for Medicaid expansion, the state, this year is putting up six percent of the dollars and ninety four percent is coming from the federal government.

So the state share is low to begin with, but this population is going to you know we're buying coverage from them through these these managed care organizations, insurance organizations essentially and they pay a premium tax that actually was raised in 2016 so those premium tax dollars are covering most of the state share and the state is also saving money on the other end because these these 400 it's I think it's up to four hundred and eighty six thousand people who are now covered under Medicaid expansion, most of whom were previously uninsured, they're still going to get sick.

That federal money that is brought into the state, now let's let's be clear the most important thing about Medicaid expansion is that people are getting care that they need that they didn't weren't able to access before, but you're also bringing a lot of federal dollars into the state and that money is paying doctors, it's paying nurses, it's paying clinics, it's paying pharmacists, it's paying orderlies, it's paying the salaries of health care worker--that's what the health care system is.  And those health care workers are paying income tax on that and and the study that came out, I said I think it's more than 50 million dollars in income taxes, they're paying sales tax on that money I mean these are people who live in our communities, who who are working and paying taxes and being contributing members of our community who are paying being paid by tax dollars and that is economic activity and so that's what and and when they go out and they buy things that spending supports other jobs that aren't healthcare related, and so that's when we talk about direct and indirect jobs and it's the same formula that the government uses and economic analysts use when they talk about the impact of bringing in a steel plant or or a, some kind of factory.

They talk about the direct jobs of people working in that factory and then the indirect jobs of what they're spending in the community supports in terms of employment.  And so that's why this study is so important.  The reason we don't feel it the same way we do if somebody comes and puts a factory in your town is because this is spread out all over the state.  Health care happens in every parish, in every town, in every city so so it's not nineteen thousand jobs in one location, it's it's nineteen thousand jobs spread around the state and are being supported by these Medicaid dollars. So frankly that's that's been a big contributor to the economy, it's money that in many cases, I mean we're paying federal taxes to Washington, so it's money that's coming back that we already pay and that's generating economic activity.  And I think it was one of the best, smartest decisions this governor has made, was the decision to take advantage of that