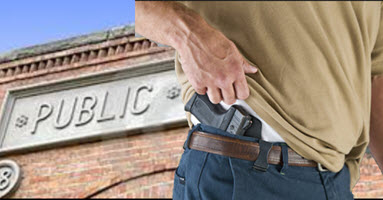 by Tom Aswell, Publisher of Louisianavoice.com   My post last week about HB 607 that would allow anyone with a concealed permit enter a public school got the expected response, both from those in favor of the bill by Rep. Blake Miguez (R-Erath) and Sen. Neil Riser (R-Columbia) and those opposed.
In legislators’ frenzy to cozy up to the NRA and thus solidify their re-election chances among Louisiana’s hunters and gun enthusiasts, 59 House members VOTED in favor of the bill.   At least they can support the potential for schoolhouse slaughter even if they can’t find it in their conscience to solve the state’s financial woes. Harsh words? Yep, and I stand by them despite comments to last week’s post such as this one:

Concealed weapons permit holders are the cream of the crop when it comes to individuals. They are professionals, business owners, and even grandmas. Trust me when I say you want me being able to defend you against those that wouldn’t get a permit and probably obtained their gun without a background check. Criminals are not the ones that abide by the rules. That’s something that liberals have yet to figure out.   No, Sunshine, I most certainly do NOT want you defending me. And yes, you are correct that criminals are not the ones who abide by the rules. But by your logic, you’re advocating that we simply dispense with the rules for everyone. Some people speed, litter, rob, loot, expose themselves in public, and cheat at cards and since they do, just eliminate the rules against those offenses and let everyone do it. Problem solved, right?

Here’s another brilliant observation: In the first place, schools should not be gun free zones. Most mass shootings have occurred in gun free zones. I am for arming willing teachers and for allowing licensed concealed carriers to go onto school grounds. They have been vetted and trained. It is an insult to these fine people to trash talk what they “might do” in a chaotic situation. I’d rather for my grandchildren to know that somebody was on their side beside one resource officer way on the other side of the campus and not having to cower in a classroom corner waiting in horror as they hear the shots coming closer. I applaud the legislators who voted for this and am waiting for the Governor and the Sheriffs’ Association to strongly back this bill.     And then there is this comment which went far in exposing the thought processes employed by those 59 representatives who voted for this insanity: I immediately checked with my Representative who voted yes on this bill. I asked him to explain his vote. I asked if his vote was influenced by NRA, ALEC or the Small Business group, specifically. He answered very quickly…however, his answer was a rambling discourse on why he is a licensed concealed carry person because of security at the Capitol, etc. He repeated this several times. Then he launched (into) the part where any school district can opt out of this bill. He stressed this over and over. He never really answered my question and by not answering my question, he actually answered my question. His reasons for voting for this bill, according to his own response, has nothing at all to do with school safety. As far as I can tell, from his response, it has mostly to do with pleasing the NRA, ALEC and that Small Business group. He will not be getting my vote.   Now, let’s examine those “cream of the crop” and the “vetted and trained” claims and see how they play out in actual, NON-EMERGENCY SITUATIONS involving “vetted and trained,” “cream of the crop” personnel:   A school police officer accidentally fired his gun in his Virginia office, sending a bullet through a wall into a middle school classroom.
A teacher (who moonlights in law enforcement) was demonstrating firearm safety in California when he mistakenly put a round in the ceiling, injuring three students who were hit by falling debris.
A sheriff left a loaded service weapon in a locker room at a Michigan middle school, where a sixth-grader found it.
An Associated Press review of news reports collected by the nonprofit Gun Violence Archive revealed more than 30 publicly reported incidents since 2014 involving firearms brought onto school grounds by law enforcement officers or educators. Guns went off by mistake, were fired by curious or unruly students, and were left unattended in bathrooms and other locations.   Several years ago, a teenage girl was killed in a horrific accident when a rifle in a gunrack inside a truck in the parking lot of Simsboro High School in Lincoln Parish discharged.   And then there’s this factor to consider: Some insurance companies have even refused coverage for schools that allow non-law enforcement personnel to be armed.   Of course, Donald Trump could be counted on for his usual reversal of position during his speech Friday to the NRA convention in Dallas. Trump, who initially voiced his support for tighter control of access to assault weapons in the wake of the Parkland, Florida, shootings, did his customary flip-flop when he called for allowing “trained” teachers to carry concealed weapons in schools, along with more security guards.   In his best Trumpgasm rhetoric, he crowed that the best deterrent to a shooter would be “the knowledge that their attack will end their life and end in total failure. When they know that, they’re not going in.”   It’s unclear if he was still talking about school shootings or if Stormy Daniels flashed through his mind with that last statement.   But here’s a news flash for you, Trumpster: Your cockamamie theory that a shooter won’t enter a school if he knows a teacher is armed because they know to do so “will end their life” is pure wishful thinking at best, B.S. at worst.   Give this some thought Thumper: How many school shooters have come out alive in the past? In fact, how many of any of the mass shooters have survived? A hint: damn few.   Frump, you should be able to figure out, with your self-proclaimed “incredibly high IQ,” that there is something mentally askew with these people or they would not gun down innocent children or classmates or concert-goers or church members or cops randomly in the first place.   They go into the schools, hotels or churches to kill with the express purpose of dying themselves—while taking as many with them as they can before they die, usually by their own hand.   So, just how does arming teachers or allowing a concealed carry permit holder to enter a school building deter a would-be shooter?   Somebody—specifically Miguez or Riser and 57 other House members—please answer that question.   And oh, please don’t resort to the tired, worn-out “liberal” argument. It’s not about liberal or conservative; it’s about common sense. It’s about finding a real solution, not re-creating the Gunfight at the OK Corral. To argue otherwise only illustrates that you don’t really have an answer other than name-calling.

More in this category: « Louisiana legislature: Alario's role, institutonal memory and polls Edwards scares nursing home seniors but has he sent letters to Pelicans and Saints? »
back to top