Edwards scares nursing home seniors but has he sent letters to Pelicans and Saints? 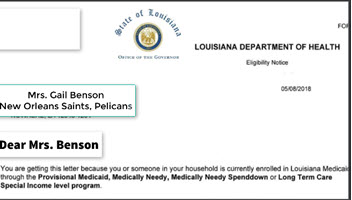 Is Louisiana Governor John Bel Edwards being fair or is he "over the top", scaring seniors with potential "kick-you-out-of-nursing-homes" letters as a result of the budget standoff with the Republican House of Representatives?  And why scare seniors, Governor Edwards, have you sent out contract-reduction letters to the Saints and the Pelicans?

This is the gravaman of the response Colonel Rob Maness gave when he discussed Governor John Bel Edwards's administration's action this week. Edwards have sent out letters to notify certain seniors (around 37,000, that they might be forced to be kicked out of the nursing homes, further claiming that the medicaid money is not there to fund their continuing stay.

Republicans have taken the hit on this issue and are fighting back, blaming the governor of scare tactics.  Maness discussed those efforts during the initial part of a Facebook Live discussion with me today.  Below is the Facebook video and the transciption of relevant passage:

We'll see senator finance committee meets again today but the most interesting things that have been going on around the budget is the fight over Medicaid expansion and the governor's team and the executive branch sending out tens of thousands of letters threatening to kick people out of nursing homes and off of homecare and disabled folks off of their care in their homes and everything.

And you know it looks to me like he's he's won the narrative so far, you know the Republican especially the GOP delegation in the house had a big social media and and still does a video effort to try to get their message out so they wouldn't be captured by a narrative now, now that the nursing home letters I think it's terrible.

It's a terrible way to do business for the governor. I'm shocked that he's taking this act akin in in a personal way but in a from a partisan perspective I'm not surprised at all. I mean Barack Obama he closes this down the World War two Monument and resulted in the Million Vet March that I had the privilege of speaking at and those kind of things.

So so it's not not a surprise from that perspective, however it's it is scary for folks to get those letters when really I mean the budget hasn't even gone beyond halfway through the process yet.

I just mentioned the oil price per barrel at $71 that's huge and it's going to have a big impact and everything so while the governor may be winning narratives in the short term I think in a long term this this type of messaging tactics kind of hurt him and hurt the Democrats. But the Republican side has got to get their bet get back on their message, that you can see in the media this week I think that they they're kind of reeling back and those kind of things, but here's the bottom line, the question that they're not asking over and over in the media on the Republican side is the one that I'm asking myself --okay the governor has the ability and has the funds to prioritize outside of Appropriations directive from the legislature and if that's the case and that is the case, that's the truth--have the Saints and the Pelicans received their letters threatening them to that they're gonna get their funding removed?

Is that happen because-- it hasn't happened yet, that's a rhetorical question, we know the answer to that and that tells you that the governor's and the executive branch are not prioritizing the elderly and the disabled before anything else, as a matter of fact is any other subsidized group besides those elderly and disabled folks in nursing homes and the like that are getting those thirtysomething I think it's 37,000 letter-- the numbers keep changing-- so that are getting those scary letters and I'm dead serious

I'm not, this was not sarcasm, they are scary. If my mother was in a nursing home in Louisiana I would be very upset if she got one of those letters so this is this is a big deal and again I think in a long term it's gonna hurt the governor and hurt the Democrat Party because they haven't sent any letters to groups like the Pelicans and the Saints you know and I'm being I'm being bombastic when I say that but but it's just the truth, you know. Where are our priorities don't you think we ought to be prioritizing the elderly and the disabled that are in nursing homes and are getting this care on Medicaid before anything else and the governor has the power to do that so that's my question for the the governor's folks and the governor himself is--here are you going sir, come on, this is not right. You're scaring the heck out of people and in the budget process is only half, the Republicans have a point on this one, it's only halfway through the process, there is no budget yet so to do this is it's just a wrong approach and I think it's it's over the top