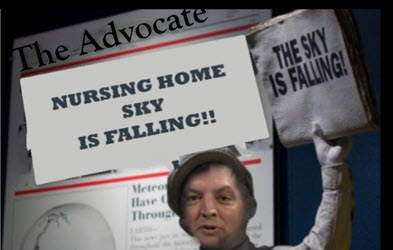 Did Governor John Bel Edwards and Jay Dardenne last week when play the "Nursing Home" Scare Card when they sent out notices to nursing home residents warning them of possible evictions.

It surely made a lot of noise and news in Louisiana and nationally as if the ceilings were collapsing on those least able to take care of themselves. Or, at least, that is what many of the Republicans and Conservatives are saying across the state.

This was the topic of discussion in part two of the video interview with John Kay, Louisiana director of the Americans for Prosperity, a national conservative group.


Earlier today, I discussed the controversial notices with Kay. The notices controversy made national news evoking the fear that the conservatives and republicans were recklessly refusing to budge on funding the budget, thus, the notices.

SABLUDOWSKY: So I mean right right now we have a real mess. last week was very emotional in terms of the governor's office sending out those letters and and so there was the charge the counter charge that that they shouldn't shouldn't be doing this as scare tactic. I mean what what is going on there?
KAY: I know that the notices that were sent out last week have have garnered a lot of fire--the one thing that I would like to point out is while they weren't political notices they had a very distinct taste and flavor of being election year tactics. That's what they felt like. It felt like let's go scare this group of people with a policy that has not been put into place, so let's play on their emotions let's play on their livelihoods, as an effort to get them to agree with our side of the debate.
KAY:  I think that it was inappropriate. I think that it was extremely premature and just the following day, those cuts were restored in the Senate. I think that the governor's offices reasoning for doing it was weak at best when Commissioner Dardenne said that this needed to be done now, which it didn't need to be done now. It need to be done now as an effort to allow folks to find where else they may qualify for when in reality these cuts could not have taken place without approval from CMS which likely would have taken a few months to happen, if they would have approved the cuts at all.
So I this feels like the most political thing that the governor's office has done outside of may be threatening to eliminate LSU football a couple of years ago. This feels like the most political thing it reeks of desperation and it reeks of electioneer tactics and I, and I know they haven't yet and I doubt that they will, but I think that the governor's office should apologize for this.
SABLUDOWSKY: So okay, let me let me, you have to understand I love playing devil's advocate
KAY: sure that's what you're here    SABLUDOWSKY: yeah so at what point in time would be say the administration be in good grace to be able to go ahead and to send off notices like this?   KAY: I'm not sure exactly what time but definitely not during the process of building a budget. The budget had not even been voted on by Senate committee it only moves through the house, so if there are notices that need to be sent out, i guess that those would need to happen sometime between the time that the governor signs the budget, which by the way, he didn't have to sign the budget, if it had been passed the exactly, the house sent it through, he could have vetoed that and call them right back in the special session and said no we're not going to do that, we're gonna fund nursing homes.
So if notice has ever needed to be sent out, it would need to be in after a budget was enacted after a budget became law and sometime between that and that time and when CMS ruled on whether or not they could actually do this in the first place.
SABLUDOWSKY: But then it would be too late?
KAY: You still have what's likely a month long process for CMS to do this—
SABLUDOWSKY: Right but but you don't have the persuasion towards your legislature
KAY: Well I think you just hit on it. This was not done, this these letters were not sent out as an actual, as a mechanism to really inform people of nursing home closures, they were sent out as persuasion to legislators. They were sent out to try to get the elderly who were in nursing homes or just other folks who are in nursing homes on board with the governor's plan to raise taxes and that is unacceptable. It's not that the notice that notices were sent out-- it's that notices were sent out with a political bent with political reasoning, political logic behind them. That's where the problem comes into play.
SABLUDOWSKY: But isn't that the process, I mean you know the thing is and again I'm just thinking out loud, I mean, certainly, if I were in a nursing home, the last thing I'd like to see is a notice that I might be evicted, so I certainly understand what you're saying that I might be evicted so I--waiting till after say the legislature and the governor signs legislation is is too late, so at some point in time--I mean, don't people in nursing homes have the right to express themselves in terms of free speech to tell their legislators--no--you know this has got to stop--I'm just trying
KAY: But again the this would never become law unless the governor wanted it to become law and signed it himself, so he is actually sending out notices for a piece of legislation that he knows that he'll never sign into law so these cuts would never go into place in the first place. He knows that he is against the budget, he knew that when he sent the letters out. I think that everyone knew that.  I think that's the one part of the conversation that's kind of been a little bit muted, it's been about the press conferences that happened afterwards, just been about what the governor said and did, in reality we're missing the whole point, that this piece of legislation as it was written at that time, would never become law and actually be changed it the very next day